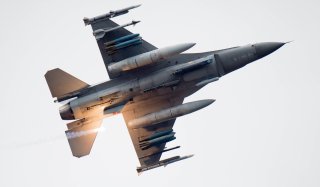 The U.S. Air Force is arming its fleet of F-15 Eagle fighter jets with a new aircraft targeting sensor engineered to function in a challenged, or “radar-denied” environment.

The Legion Pod uses the infrared spectrum to conduct precision targeting missions in areas which might have a high degree of “jamming” by an enemy. The Legion Pod is now operational on the F-15C Eagle and, according to an Air Force report, it could be integrated onto the F-15EX and F-16 Fighting Falcon.

“In today’s warfighting environment, not only do we have the capability and technology to jam and counter radar, but our enemies do too,”  Maj. Daniel Hermanski, Air Combat Command’s F-15 requirements branch chief, said in the Air Force report. “This pod is the next step for countering jamming technology and allowing our warfighters to fight and track the enemy in contested environments.”

Many of the technological specifics regarding how the Legion Pod operates are likely not available, yet there are a growing number of high-tech methods now used to “harden” communications networks against intrusions or attempted enemy “jamming.”

One such possibility could be what’s called “frequency hopping,” a technology used to ensure radio frequency (RF)-reliant targeting systems can succeed in a “jamming” environment wherein an enemy is specifically attempting to interfere with the signals. Enabled by sensors and advanced computing, frequency hopping technology allows an RF system to recognize a jammed or cluttered frequency and simply switch to another that is unencumbered by interference.

The Pentagon and military services are working on new levels of artificial intelligence-enabled technology able to track, identify, and help “deconflict” the electromagnetic spectrum, in part to help distinguish blocked or jammed areas from those without interference.