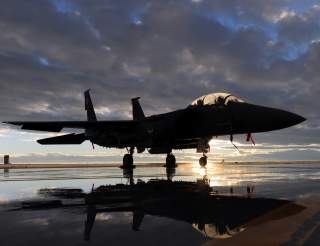 The U.S. Air Force has begun the process of buying its first new F-15 Eagle fighters in more than 15 years.

The initial purchase of new, twin-engine F-15EXs from Boeing’s St. Louis production line could lead to a wider modernization of the Air Force’s Eagle fleet. Chicago-based Boeing last delivered an F-15, an E-model Strike Eagle, to the Air Force back in 2004.

The GE F110-129 is a popular fighter engine. It powers half of the Air Force’s roughly 900 F-16s and most of the service’s 200 F-15Es, according to Air Force Magazine. Pratt & Whitney in Connecticut also makes fighter engines for the U.S. military, but the latest F-15 models are incompatible with Pratt’s engines.

The flying branch is proposing to buy 18 each F-15EXs in the years 2021 to 2024, for a total of 80 new Eagles over the next five years, according to Air Force budget documents.

The F-15Es mostly date from the 1990s. The F-15Cs and Ds are 1970s- and 1980s-vintage aircraft. Each has racked up more than 8,300 flight hours, on average, the Air Force stated. That's roughly double the service-life that builder McDonnell Douglas, later Boeing, designed the plane for.

The F-15Es have tougher airframes than the F-15C and Ds have. The flying branch is upgrading the Strike Eagles with new radars as part of a plan to keep the fighter-bombers in service for decades to come.

Many of the F-15Cs, however, suffer from structural fatigue that limits their top speed. "Many F-15C/Ds are beyond their service life and have serious structures risks, wire chafing issues and obsolete parts," the Air Force stated. "Readiness goals are unachievable due to continuous structural inspections, time-consuming repairs and ongoing modernization efforts."

The Air Force plans to swap out old Eagles for new ones in squadrons that already fly F-15s, thus minimizing disruption to operations. Replacing the oldest and more tired F-15Cs and Ds for combat missions could allow the healthier old Eagles to continue flying in the training role.

The service also is considering arming the new F-15s with a hypersonic missile, potentially making the Eagle force the branch's first units to perform a new kind of specialist strike mission.

The F-15EX purchase has not been without controversy. The Pentagon’s Cost Analysis and Program Evaluation office advocated for the Boeing plane as a means of quickly replacing some of the oldest fighters in the Air Force’s inventory while the service also buys new F-35 stealth fighters.

Some lawmakers worried that F-15 purchases would rob the F-35 program of resources, but Air Force leaders have insisted the F-35 is their top priority. So far the new F-15 buy has had no impact on U.S. F-35 orders.