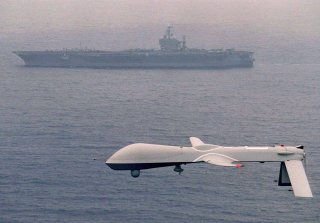 Senior Air Force Commanders are employing new tactics, technologies and protocols to better safeguard drones from being shot down by enemy fire during missions.

Air Force Gen. Jeffrey Harrigian, the commander of U.S. Forces Europe, recently told reporters that senior U.S. military leaders are now amidst a decided effort to increase mission survivability for combat drones operating in high-risk areas. Responding to a question about an MQ-9 Reaper being shot down over Yemen last year, Harrigian emphasized that drone operations need to become less predictable to enemies.

“There is something to be said for operating in a manner that offers us an opportunity to not be as predictable as we have been. We’ve been too predictable, so we are working to facilitate tactics that allow us to be less predictable, which includes having an idea where the threat is and how to avoid it,” Harrigian said during a Mitchell Institute for Aerospace Studies interview forum.

Describing it in terms of a continuous learning curve, Harrigian explained that advanced communications with air assets and command centers can vastly improve prospects for drone mission success.

“We continue to learn an awful lot about how to optimize our use of Reapers in theaters where they can quickly become tested. It starts with our coms and the environment we are in,” Harrigian said.

Being less predictable may involve a number of interesting tactics, such as varying routes or surveillance locations to confuse potential adversaries about which areas are of greatest interest. It could also mean changing altitude, dwell-time or mission frequency, as well. In addition, there are a host of possible methods through which drones might become more survivable, to include stealth configurations, longer-range, higher fidelity sensors and weapons and, perhaps of greatest significance, network “hardening” against hacking attempts or various intrusions.

The increased information processing and network proficiency now possible with advanced systems means vulnerability may also be increased as adversaries attempt to jam, intercept or destroy drone signals and targeting technologies. Adversaries have also studied how drones target and destroy areas of interest, and adjusted to new tactics such as obscuring high-value assets such as vehicles and forces beneath various coverings or in rugged terrain. In more advanced cases, adversaries may have learned which shapes and signals are targeted successfully and made adjustments to change heat signatures, external configurations or locations to complicate or confuse drone sensor systems.

Yet another way to increase drone survivability would simply be to quicken the pace of information and video-feed data processing. The faster gathered ISR data can be received, organized and transmitted to identify the points of greatest relevance, the less time a drone may need to fly to accomplish its objective. As Harrigian explained, much if not all of these methods hinge upon fast-improving methods of command and control now being refined through the Pentagon’s Joint All Domain Command and Control program.

“We want warfighters to have the awareness to make decisions faster by understanding what the warfighter at the tip of the spear needs. The goal would be to refine the timelines to take the data from different sensors and provide those to shooters,” Harrigian explained.