The Air Force Has Plans for the B61-12 Nuclear Bomb 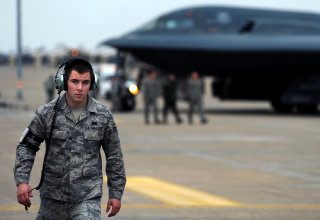 The Air Force’s F-35 jet will soon be armed with an upgraded, multifunctional variant of the B61-12 nuclear bomb. A successful release of two inert weapons from the Aircraft during a nuclear weapons certification test is a sign that the military service is moving toward that future. During the certification test, the fifth-generation fighter jets released two Joint Test Assembly weapons as part of a final preparation to introduce a nuclear-capable stealth fighter.

The B61 nuclear bomb and all its different variants have existed for many years. But the upgraded B61-12 nuclear bomb improves accuracy and integrates various attack options into a single bomb. It changes the strategic landscape with regard to nuclear weapons mission possibilities.

The B61-12 nuclear bomb will consolidate several different kinds of attack options into a single weapon and give the Air Force access to new levels of precision targeting. Instead of needing separate variants of the weapon for different functions, Air Force officials can use the B61-12 nuclear bomb for earth-penetrating attacks, low-yield strikes, high-yield attacks, above-surface detonation and bunker-buster options.

For example, scientists have explained that the bomb is engineered with a special “Tail Subassembly” to give it increased accuracy, thereby improving its precision targeting using Inertial Navigation Systems. The B-2 Spirit, which is armed with the B-61 carries multiple variants of the weapon, including the B61-7, an earth-penetrating B61-11 and a B83-1 high-yield bunker buster weapons, according to Hans Kristensen, the director of the Nuclear Information Project at the Federation of American Scientists.

“The main advantage of the B61-12 is that it packs all the gravity bomb capabilities against all the targeting scenarios into one bomb,” he said. “That spans from very low-yield tactical ‘clean’ use with low fallout to more dirty attacks against underground targets.”

While the B1 thermonuclear gravity bomb has origins in the 1960s, the latest variant is engineered as a low-to-medium yield weapon that has a two-stage radiation implosion design, according to nuclearweaponsarchive.org. Air Force officials describe this, in part, as an “all up round.”

An “earth-penetrating” nuclear attack introduces new tactical options for commanders who may want to destroy underground bunkers and ammunition storage areas without wanting to inflict catastrophic damage across a large civilian area.

Streamlining and upgrading different nuclear bomb variants into a single weapon creates a variety of advantages, including the ability for a weapons-carrying aircraft such as a B-52 Stratofortress or B-2 Spirit to carry a larger number of bombs. Pilots could tailor those bombs for a particular threat circumstance or mission. This would allow them to travel without a larger, heavier arsenal. This ability would prove useful in the event that a multifaceted or large-scale nuclear attack became necessary.

“A nuclear weapon that detonates after penetrating the earth more efficiently transmits its explosive energy to the ground; thus, is more effective at destroying deeply buried targets for a given nuclear yield,” Kristensen explained. “A detonation above ground, in contrast, results in a larger fraction of the explosive energy bouncing off the surface.”