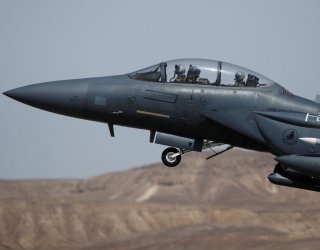 This week the Department of the Air Force announced that it has awarded a nearly $1.2 billion contract for its first lot of eight F-15EX fighter aircraft. These aircraft will replace the oldest F-15C/Ds in the current Air Force fleet.

The purchase of the F-15EX aircraft was approved in the fiscal year 2020 budget and twelve additional aircraft were requested in the FY21 budget. The Air Force has announced that it plans to purchase a total of seventy-six of the advanced versions of the F-15 over the next five years as part of the Future Years Defense Program. The contract also gives second life for the F-15 production line in St. Louis, Missouri.

This deal marks the first major purchase in a long-term, $23 billion program that will update the Air Force’s aging fleet of fighter jets but also provides a competitive alternative for Lockheed Martin’s F-35 Joint Strike Fighter.

“The F-15EX is the most affordable and immediate way to refresh the capacity and update the capabilities provided by our aging F-15C/D fleets,” said General Mike Holmes, commander of Air Combat Command. “The F-15EX is ready to fight as soon as it comes off the line. When delivered, we expect bases currently operating the F-15 to transition to the new EX platform in a matter of months versus year.”

The first two of the eight F-15EX aircraft are already being manufactured and are scheduled for delivery in the second quarter of next year. The remaining six aircraft will be delivered in FY23, and all eight of the new aircraft will be fielded at Eglin Air Force Base, Florida to support testing efforts.

The F-15EX is a two-seat fighter that will feature capabilities unique to the Air Force version. It features a deep magazine that will allow it to carry a load of advanced weapons, while the platform will also require only minimal transitional training and little additional manpower from the older versions of the F-15. According to the Air Force, it will require little to no infrastructure changes.

The F-15, a fourth-generation multi-role fighter, first entered service in 1976–so there is also a proven track record with the aircraft.

The National Interest previously reported, “The F-15EX will be easier to build, put into service, and maintain than an equal number of F-35s. The Air Force estimates F-15EX’s share 70% of parts with F-15Cs and F-15Es that they will be replacing. Not only are production lines still in place, but the training facilities, maintenance depots, and other infrastructure can be easily shifted to F-15EX support from other F-15 variants.”

Boeing noted that the F-15EX can enable rapid technology insertion that will ensure the platform’s relevance for decades to come. This will be accomplished via an Open Mission Systems Architecture, which can deliver Advanced Battle Management Systems (ABMS) capabilities, allowing the F-15EX to operate independently while isolated but also to reconnect to the military’s global cloud.

“The F-15EX’s digital backbone, open mission systems, and generous payload capacity fit well with our vision for future net-enabled warfare,” said Dr. Will Roper, assistant secretary of the Air Force for Acquisition, Technology and Logistics. “Continually upgrading systems, and how they share data across the Joint Force, is critical for defeating advanced threats. F-15EX is designed to evolve from day one.”

As DefenseNews reported, one major advantage of the F-15EX is that aircraft’s payload capacity, which will allow it to carry and launch hypersonic missiles at standoff distances.

While the cost of the new F-15EX is about the same as the F-35, and it lacks the stealth of the Joint Strike Fighter, the F-15 can fly higher, farther and faster–and has that greater capacity for weapons. The operational costs are another consideration. An F-35 costs $35,000 per hour to operate, while an F-15EX costs $27,000 per hour.

“The F-15EX is the most advanced version of the F-15 ever built, due in large part to its digital backbone,” said Lori Schneider, Boeing F-15EX program manager via a release. “Its unmatched range, price and best-in-class payload capacity make the F-15EX an attractive choice for the U.S. Air Force.”