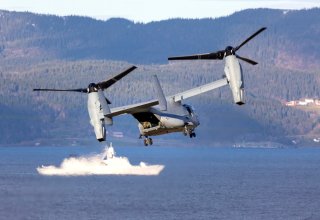 VSA has proposed its HoverJet Guardian model, which could meet or even exceed the requirements for speed, range, survivability, cargo capacity, and hovering. The Guardian would have the added bonus of being able to land on water. The platform combines the speed and agility of a jet with the hovering capabilities of a helicopter.

"We are proud to be selected and have the opportunity to collaborate with [the Air Force] and USSOCOM to create game-changing technology that will positively impact our military, creating a more mission-ready and resilient fighting force," said Glenn Dawson, Co-Founder and CEO of VSA.

"There are so many positives to working with AFWERX as well as United States Special Operations Command (USSOCOM)," added Dawson. "Whether it is collaborating to create products that can positively impact our service people by helping to create a more resilient and mission-ready military force or the opportunity for VSA to receive funding for concept development as well as the potential to create business partnerships with the Air Force or other U.S. Government agencies, we’re grateful for the opportunity to move forward in this competition."

VSA's HoverJet solution was initially envisioned as part of a broader HSVTOL conceptual framework intended to increase the ability of the Air Force and USSOCOM to carry out missions across a full spectrum of conflict and political scenarios. It has since emerged as a top-tier entrant in the HSVTOL Concept Challenge by meeting or exceeding rigorous evaluation criteria.

"The HSVTOL Concept Challenge has surfaced an impressive range and caliber of solutions to help us understand how to build a new class of air vehicles," explained Dr. Reid Melville, the Chief Innovation Officer of the Air Force Research Laboratory’s Transformational Capabilities Office. "We believe the organizations selected to receive market research investments at this stage have the potential to deliver truly groundbreaking innovation."

Valkyrie's Guardian prototype is a streamlined and stealthy aircraft that can lift and deliver a full 6,000 pounds of cargo at sea level. The Guardian boasts a top sprint speed of 450 miles per hour and a cruise speed of 340 miles per hour. It has an endurance of fifteen hours and can fly at altitudes of up to 40,000 feet above ground level.