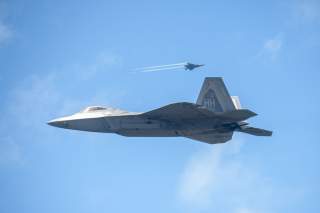 The U.S. Air Force on April 22, 2019 practiced spreading out its warplanes across the Pacific region in order to make it harder for Chinese forces to target them.

Actually, preparing for bad weather was the main official justification. But the “dispersal exercise” also is part of an evolving Pentagon plan for waging high-tech war against China. American forces would spread out to dodge Chinese attack, then gather to conduct their own attacks.

“Pacific Air Forces airmen and aircraft from across the command joined together at Andersen Air Force Base, Guam ... to participate in a dispersal exercise throughout Micronesia,” the Air Force reported.

The exercise, named Resilient Typhoon, is designed to validate PACAF’s ability to adapt to rapidly developing events, like inclement weather, while maintaining readiness in support of allied and partner nations throughout the region.

The exercise tests PACAF’s ability to execute flight operations from multiple locations in order to maintain readiness and involves airmen and aircraft concentrated in one place – Andersen AFB – separating via a dispersal, recovering and then rapidly resuming operations at airports and airfields in: Guam, Tinian, Saipan, The Federated States of Micronesia … and Palau.

A wide range of aircraft participated in the exercise, including F-16s from Misawa air base in Japan, F-15Cs from Kadena, C-130Js from Japan’s Yokota air base and C-17s and F-22s from Pearl Harbor in Hawaii.

“Operational environments and global threats evolve rapidly,” said Brig. Gen. Michael Winkler, PACAF director of strategy, plans and programs. “We must ensure that all forward-deployed forces are ready for a potential contingency with little notice and that we can move more fluidly across the theater to seize, retain and exploit the initiative in any environment.”

The concept caught on. In July 2017, Air Force commandos in the United Kingdom practiced deploying to an austere airfield to quickly refuel and rearm F-15s from the 48th Wing. It was the first time that Air Force special operators and their MC-130 transports had teamed up with F-15C fighters at a so-called forward arming and refueling point, or FARP.

The U.S. Marine Corps meanwhile is developing its own concept for “distributed” operations in the Pacific region. On Dec. 7, 2018, Marines with Marine Aerial Refueler Transport Squadron 352 hauled two M142 High Mobility Artillery Rocket System launchers from Camp Pendleton in California to Dugway Proving Grounds in Utah, where a war game was underway.

The Marines similarly are beginning to spread out their growing force of F-35B stealth fighters across a large number of U.S. and allied ships. U.S. Navy amphibious assault ships have embarked wings of up to 10 F-35s. The Corps also has considered flying stealth fighters from South Korean and British ships.

Whether it’s Air Force warplanes dispersing across Micronesia or Marine rocket batteries and stealth fighters deploying across island chains and ships, the underlying principle is the same.

Spreading out your forces makes them harder to target. That concept could prove decisive in the event the United States and China ever go to war.