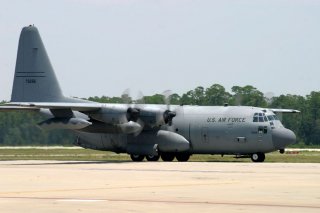 The United States Air Force has been experimenting with turning its cargo and transport planes into munitions trucks that could drop bundles of weaponry. This would refine the concept for an “arsenal plane” that could haul huge numbers of munitions into combat, and have the cargo planes work alongside bombers.

Through a partnership with the Air Force Research Laboratory, the Air Force Special Operations Command (AFSOC) successfully released simulated “palletized” munitions from a MC-130J, a multi-mission, combat transport and special operations tanker. The three airdrops were made at Dugway Proving Ground, Utah this past January.

“In the end, the demonstration accomplished all objectives,” said Jerry Provenza, the AFRL CLEAVER program manager. In the three airdrops, all five CEPs separated cleanly from the aircraft, and the munitions separated from the CEPs.

“This successful [demo] is evidence of our commitment to evolve innovative weapons concepts and enhance our partnership with AFSOC to meet the needs of the National Defense Strategy,” added Col. Garry Haase, the director of AFRL’s Munitions Directorate. “CLEAVER represents a different approach to launching large numbers of long-range weapons, which will bring a new dynamic to the high-end fight.”

One advantage for making such a transformation is that the Air Force has quite a number of cargo planes available, and it operates some 600 C-130 Hercules, C-17 Globemaster and C-5 Galaxy cargo planes. The C-130 has been doing its job of hauling men and material around the world for nearly 80 years but likely will remain in service for at least the next decade or longer.

This isn’t the first time that the Air Force has sought to convert a cargo plane into an armed aircraft. During the Vietnam War C-47 and C-130 transports were transformed into gunships, armed with multiple 7.62 mm miniguns that could selectively fire either 50 or 100 rounds per second. The former transport planes were prized for their endurance as these were designed to stay aloft for long periods, while their size allowed them to carry substantial weapon and ordnance loads.