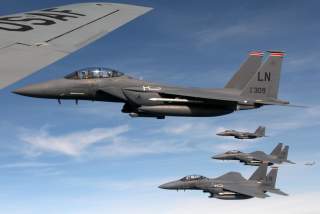 "It seems to me that we’re getting back into the fourth generation that we’re hoping to be out of," Inhofe said, according to Defense News reporter Joe Gould.

Under pressure from the office of Acting Secretary of Defense Patrick Shanahan, a former Boeing executive, the Air Force proposed to buy as many as 144 F-15Xs through the mid-2020s in order to replace 1980s-vintage F-15Cs on a one-for-one basis in the nine active and Air National Guard squadrons that fly the older type on air-superiority and homeland-defense missions.

Shanahan's spokesperson Joe Buccino said Shanahan has recused himself from any procurement decisions involving Boeing, but at least one ethics group has filed a formal complaint accusing Shanahan of favoring the Chicago plane-maker.

Air Force officials claimed the old F-15Cs would become uneconomical to fly before the 2030s. The F-15X has better sensors and avionics than the F-15C has and can carry more weapons than the older Eagle can carry.

Inhofe said he was worried the Air Force would acquire F-15Xs at the expense of Lockheed Martin's stealthy F-35, thus reducing the F-35 buy to inadequate numbers. The senator recalled the deep cuts to the F-22 program back in the early 2000s.

"Sometimes we forget what happened to our F-22s," Inhofe said. "Started out that was going to be 750, ended up being 187, and we paid dearly for that ever since then. That was a huge mistake, should not have happened."

"We absolutely [are] adamant that the F-35 program, the program of record, absolutely stays on track and we don’t take a dime out of the F-35," Air Force Chief of Staff Gen. David Goldfein told the senators.

The Pentagon requested around $8 billion to buy just 78 F-35 stealth fighters in its 2020 budget proposal. That's six fewer than the military had projected.

The Air Force would get all 48 F-35As it expected to buy. But even that quantity is far smaller than the 72 new fighters per years the flying branch claimed it must acquire in order to replace older jets before they become obsolete.

The Air Force still hopes to acquire more than 1,700 F-35s at a per-plane cost under $100 million. An F-15X costs roughly as much as an F-35 does but is cheaper to maintain and operate, according to the Air Force. An F-15X also boasts a 20,000-hour service life. That's around three times greater than the F-35's own service life.

"They can go a long way to assist the penetrating forces," Krumm said of the new F-15s.

But Sen. Tammy Duckworth, an Illinois Democrat, accused the Air Force of assuming its budget will remain steady in coming years. "I am concerned this decision is based on the funding levels of the last two years," Duckworth said, "and not a realistic view of where we will be in the next several years."

If funding falls and the Air Force must choose between non-stealthy F-15Xs and stealthy F-35s, the flying branch might pick the longer-lasting F-15Xs, Duckworth said. That could undermine the F-35 program, she warned.