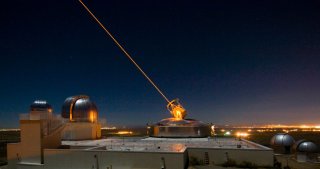 In late November, the Air Force Research Laboratory (ARFL), the flying branch’s scientific and research organization, trained a small telescope on an asteroid in space. The telescope, based near Albuquerque, New Mexico, snapped an image of (22) Kalliope, an asteroid in space, as well as its satellite, a smaller asteroid called Linus, which is about 21 miles in diameter.

Asteroids and other objects in space are detected and recorded all the time. However, what was unique about the ARFL’s picture was the size of the telescope lens that recoded the image—a scant 1.5 meters in diameter, or just under five feet.

The Air Force Research Laboratory explained in a recent press release that “normally the purview of large 8 to 10-m diameter telescopes on mountain tops in Hawaii or Chile, asteroids are faint to begin with—and their satellites even fainter—orbiting very close to their parent.”

However, in this latest image, the Air Force managed to capture a tiny body in space with an even smaller telescope.

The military application of small, earth-based telescopes detecting objects in space is not immediately apparent. Still, the same technology could be trained not on asteroids and other small interstellar bodies but on satellites in space much nearer to earth.

In an interview last year, astronomer Jack Drummond of the Starfire Optical Range at Kirtland Air Force Base explained that far-out asteroids and their moonless are essentially good practice for man-made objects.

“The reason we even look at the asteroids at the SOR is because they are a good proxy for man-made satellite observations,” Drummond explained. “Nobody wants to be near each other’s satellites. We can’t tell two satellites to get together… Instead, we look at asteroids and their moons. It’s a perfect analogy, a perfect proxy.”

Tracking the thousands of satellites in space is essential for any country with assets in orbit, but particularly so for the United States. Both China and Russia have satellite assets in space that could damage, destroy, jam, or tamper with American satellites.

Given the number of objects in space and the potential vulnerability of American space assets, the Air Force and Space Force are puttering a higher priority on detecting and tracking anti-satellite threats.