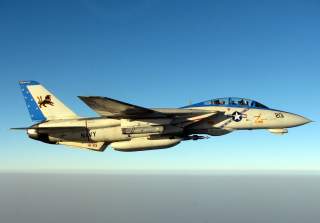 In his own plane, Aljanich first thought that his leader had been hit by the missile. After losing him for a few seconds, he suddenly saw him reappearing in full afterburner.

The USS America was cruising in the Red Sea with its escort ships. A few hours before, it had launched an 18-plane raid against an industrial site situated about 200 NM northwest of Baghdad.

The planes had been refuelled a first time just before entering Iraqi air space. They had successfully carried out their mission and turned back towards their home carrier. Commander Matt Aljanich a young ensign at the time, tells the story in Frédéric Lert’s book Grumman F-14 Tomcat in Combat:

“I was the wingman for Capt Snodgrass*, who was at the time the commanding officer of VF-33 and already a well-known figure among the F-14 community. We were flying south, passing about thirty NM west of Baghdad. It must have been 00:30 in the morning and we were half way through our six-hour-long mission. Since we were our way back, the Prowlers were far ahead of us at the time and probably their protection was not too good.

“There were MiG-29s airborne and in our sector. Numerous SAM sites were present in that zone and my ECM and radar warning gear had been lit up like a X-Mas tree. We were vigilant in jinking in altitude and heading, while rolling and visually checking for missile plumes. We were 25-26 thousand feet at the time and the undercast was broken around 13-15 thousand. Suddenly three or four SAMs punctured the cloud cover in front of my leader.

Fortunately he noticed them immediately and reacted, rolling the Tomcat into the missiles and pulling 6-7G’s while deploying chaff to aid in breaking the missile’s radar lock. The missile exploded just above and behind his aircraft. Unfortunately the F-14 had a tendency to depart controlled flight when a very hard rolling pull is executed at high subsonic airspeeds, a phenomenon exacerbated with external stores.

At that time, my leader was flying with two external fuel tanks and six missiles loaded. The plane started to depart, but he brought it quickly back. The only problem was that he had lost a lot of altitude and his right engine had stalled.”

The recovery had cost Snodgrass almost 15,000 feet and 300 knots. He was now slow with one engine flamed out and in the middle of the much dreaded Triple-A gunfire.

Although he was too slow to get a good airstart attempt on the right engine, he didn’t want to go into full afterburner on the good engine, as the only fighters with one afterburner that could be airborne that night were Iraqi!

With MiG’s in the area the last thing he needed was to be mistaken for a target!

He decided to go to minimum afterburner on the good engine, while descending deeper into Triple A «sparkles», in order to get the requisite airflow to re-light the flamed engine.

Once making heat and fire again, he climbed out with both engines in full afterburner.

The whole episode had lasted only a few dozen seconds, in total darkness.

In his own plane, Aljanich first thought that his leader had been hit by the missile. After losing him for a few seconds, he suddenly saw him reappearing in full afterburner.

“I was just a young pilot; he was the best pilot in our rank . . . And when I saw the two flames from his afterburners I thought for a fraction of a second that his two engines were on fire. And I said to myself ‘It’s all over they got him . . .”‘

But it wasn’t to be … the two planes soon regained altitude and finally landed safely back on the USS America. Captain Snodgrass ended the first Gulf War with 34 war missions to his credit, while Ensign Aljanich had chalked up 37.

Captain Dale “Snort” Snodgrass finished his brilliant career in the U.S. Navy as the official Navy F-14 display pilot and the undisputed leader of the Tomcat community, with 4800 hours of flight time and 1200 deck landings to his credit. This extraordinary record would never be equalled, much less surpassed!