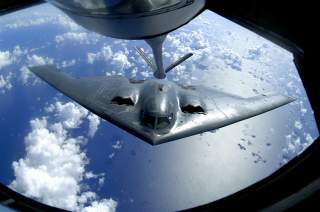 For long, debates over Air Force spending have revolved around specific platforms and technologies. How many F-35s and B-21s should the Air Force procure? How long should it continue flying its aging B-52s and F-15s? Should the beloved A-10 be retired, and will it be replaced by an even more cost-efficient OA-X counter-insurgency plane?

But at the Air, Space and Cyber Conference on September 16, 2018, Air Force Secretary Heather Wilson laid out a plan that is all about scale—having more pilots fly more planes to do more stuff. Wilson, a former congresswoman from New Mexico and one of the first women to graduate from the Air Force Academy, unveiled a proposal to activate 74 more operational squadrons by 2030, raising the total from 312 to 386—just a bit shy of the 401 squadrons active at the end of the Cold War.

The Navy, Air Force, and Marines combined muster around 3,400 combat aircraft—fifty percent more than Russia and roughly twice the number of China. However, unlike its rivals, the semi-peacetime Air Force must spread its 2,100 operational aircraft across the globe. The U.S. Air Force defends allies in Europe and Asia, fights counter-insurgency wars in the Middle East, Central Asia (and even Africa to a more limited extent), and patrols North American airspace. To maintain this grueling pace of activity, the Air Force continually shuffles small detachments of planes and personnel from one end of the globe to the other, while furnishing tanker aircraft to refuel airframes transiting those long distances.

However, there is little chance the Air Force will actually get 74 squadrons—this is a highball opening bid for a piece of the enormous defense-spending cake set on the table by the 2018 budget, which increased military spending by $52 billion. The Navy has successfully leveraged aspirations for a ‘355-ship Navy’ to secure itself a big piece of that cake, and the Air Force is hoping ‘386 squadrons’ will prove similarly catchy.

Wilson later conceded in an interview that they literally had yet to devise specifics on how the much the new squadrons cost and how they would be funded. She also did not know the number of additional airframes that would need to be procured for such ambitious plans. However, a total of 40,000 additional personnel was projected, which would have an estimated cost of $5.2 billion annually. The Air Force is currently aiming to add 15,000 personnel by 2023, for a total of 685,000 across the active-duty, National Guard and Reserve units.

But while you may be calculating that 74 squadrons amounts to well over a thousand new jet fighters, think again—over three-quarters of the new units would perform support roles. You can see the Air Forces breakdown of additional types of squadrons in this chart.

Clearly, the Air Force sees a need for even more eyes in the sky and denser communication networks. On that same theme, Wilson’s proposal would increase Space Squadrons from 16 to 23. These units test, launch and operate satellites for spying, communications and even offensive jamming. It seems these units might be incorporated into the proposed ‘Space Force,’ for which Wilson—previously a critic of the concept—released a $13 billion proposal representing the Air Force’s vision for the new branch.

Wilson would also like to increase both Combat Search & Rescue and Aerial Refueling squadrons by a third. This would grow 12-ship tanker squadrons from 40 to 54, implying 168 more aircraft. These would presumably be new KC-46 Pegasus tankers based on the Boeing 767. The twenty-seven Combat Search & Rescue squadrons would be increased to 36. These are equipped with HC-130 Combat King transports and HH-60G helicopters which can deploy ‘PJs' (pararescuemen) trained to recover personnel in the most life-threatening of circumstances.

The proposal also envisions increasing by nearly a quarter the current 84 fighter, bomber and special operations squadrons. The seven extra special operations units would operate a mixture of up-gunned commando transports, tilt-rotors, drones and light aircraft used for clandestine purposes. The seven extra fighter units would most likely fly F-35 stealth fighters, though ground-attack units operating A-10s are also counted under ‘fighters.’ This consideration of A-10s invites the question whether the Thunderbolts units would be retained, or potential new OA-X light strike aircraft like the A-29 Super Tucano would subsume their role or serve alongside them.

The proposed addition of five bomber squadrons for a total of fourteen implies increasing the total number of forthcoming B-21 Raider long-range stealth bombers from 100 to 160. Each bomber, which the Air Force touts as the decisive weapon in a trans-Pacific confrontation with China, is projected to cost over a half-billion dollars.

Todd Harrison, an aviation expert from the Center for Strategic and International Studies, tweeted an estimate that the additional 74 squadrons would incur an annual cost of $18 billion in operational and personnel expenses—not counting one-time procurement costs for the equipment and aircraft. One expert quoted in National Defense magazine estimates that would cost of $27 billion.

Of course, the Air Force is unlikely to get its entire wish list. For one, all the services are jumping at the opportunity to pursue expensive new procurement and force expansions, and even the new budget can only be divvied up so far. After all, the Air Force is already struggling to pay over $60 billion procuring new F-35s fighters, T-X jet trainers, KC-46 tankers and future B-21s for its current units!

Furthermore, it’s unrealistic to assume that the 2018 defense spending spree will be sustained over the long term, given that the current inflated budget coincides with tax cuts diminishing government revenue, causing debt to spiral.

Finally, as the Air Force is currently short 2,000 pilots for its 312 squadrons, it's hard to see how it would scrape together enough for 386 without a significant revision to its pilot recruitment and training process, as well as retention policies.

Realistically, then, Wilson’s proposed 386 squadrons is an ambitious opening bid rather than anything near a finalized plan.

However, the Secretary’s plan also shows that even when contemplating ‘great power conflict,’ the air warfare branch continues to emphasize force-multipliers like reconnaissance, command-and-control and aerial refueling units, rather than simply bulking up on kinetic systems like fighters and bombers. Figuring out in advance the best mix of ‘tail-to-teeth’ will be critical, because, unlike in World War II, a twenty-first-century great-power conflict could easily play out too fast for the Air Force to train new pilots and procure more aircraft for frontline service.