Air Force Wargames in the Pacfic Are a Response to China 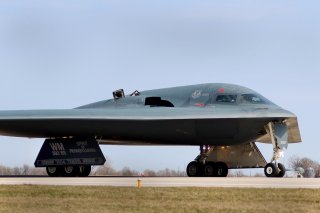 The Air Force will likely be increasing Bomber Task Force missions in the Pacific region in the coming months in response to China’s aggressive expansion of its Air Force and the provocative actions it continues in sensitive areas near Taiwan and Japan.

Air Force Chief of Staff Gen. Charles Brown said the military service is concerned that China has a larger air presence in the Pacific region than the one that the United States currently maintains. He stopped short of specifying any particular measures he might direct in response to that presence though. He did say there was a realistic possibility of increasing the Air Force footprint in the Pacific region and noted that U.S. allies in the area are increasingly playing a vital role in deterring China’s aggressive tactics.

Brown told the National Interest on the sidelines of the Air Force Association’s annual symposium that the military service was doing a lot of “analysis wargaming” to determine what he said would be the “right force capability for bombers, [intelligence, surveillance, and reconnaissance,] and command and control.” He said the Air Force would “continue” its use of bomber task forces wherein key aircraft such as B-2 Spirit bombers, B-1B Lancer bombers and even theater air sustainment packages with F-35 jets uptick patrols and deterrence operations in the region.

What might an increased U.S. presence in the Pacific look like? Certainly it might leverage existing land bases where service assets already operate such as U.S. air bases in Guam. It also seems entirely realistic that more U.S. platforms could operate from friendly allied locations in places such as Australia and Japan or additional Southeast Asian countries.

Japan, Taiwan and Australia add another element to this ongoing buildup in the region among U.S. allied forces. For instance, Japan is not only buying the Air Force RQ-4 Global Hawk drones for regional surveillance but the country is in the early stages of a massive, multi- billion F-35 buy too. Some reports say the Japanese plan to operate well over 150 F-35 fighter jets to include a mix of F-35B and F-35C variants. Given the ability with which F-35 jets are known to be able to securely link to one another through a Multifunctional Advanced Data Link, it certainly seems realistic that larger numbers of U.S. F-35 jets could transit to the Pacific region for and operate in close coordination with Japanese and Australian F-35 jets.

More B-52 Stratofortress bombers and B-2 Spirit bombers could also either rotate through more quickly or permanently base in the Pacific region should allied locations open up. This would further support the Air Force’s recent expansion of bomber task forces, something that gained momentum earlier this year. The Air Force began increasing bomber task force patrols to make sure the United States and its coalition partners were less predictable and more assertive about deploying equipment to threat regions.