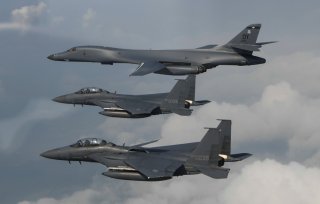 A recent live-fire test saw an F-15E Strike Eagle destroy a “full-scale surface vessel” in the Gulf of Mexico with a new, experimental anti-ship munition—a unique foray into anti-ship warfare.

The test, carried out by the U.S. Air Force Research Laboratory (AFRL), demonstrated the feasibility of using a GBU-31 Joint Direct Attack Munition (JDAM) as a low-cost solution to quickly get mass into the fight against ships. The Air Force has dubbed its effort QUICKSINK, a nod to the modified JDAM’s role against ships and the rapidity with which the Air Force would like to validate this munition.

“QUICKSINK is an answer to an urgent need to neutralize maritime threats to freedom around the world,” said Col. Tony Meeks, director of the AFRL's Munitions Directorate, said in a statement covering the test. “The men and women of this directorate consistently find ways to solve our nation’s greatest challenges.”

QUICKSINK’s JDAM is essentially a 2,000-pound unguided bomb, modified with a bolt-on precision guidance kit for an anti-ship role. For that role, the weapon features a tail section with four control surfaces as well as a guidance unit. In the past, other munitions, such as torpedoes and anti-ship missiles, have been favored to take out enemy ships. Though now, QUICKSINK’s modified JDAM munition could offer commanders greater ordnance flexibility.

“Heavy-weight torpedoes are effective [at sinking large ships] but are expensive and employed by a small portion of naval assets,” said Maj. Andrew Swanson. “With QUICKSINK, we have demonstrated a low-cost and more agile solution that has the potential to be employed by the majority of Air Force combat aircraft, providing combatant commanders and warfighters with more options,” Major Swanson explained.

The AFRL program member explained that U.S. Navy submarines, the wolves of the ocean, pose a considerable threat to surface vessels. Still, submarines are costly, as are their anti-ship missiles and torpedoes. “A Navy submarine has the ability to launch and destroy a ship with a single torpedo at any time, but the QUICKSINK JCTD aims to develop a low-cost method of achieving torpedo-like kills from the air at a much higher rate and over a much larger area,” said Kirk Herzog, AFRL program manager.