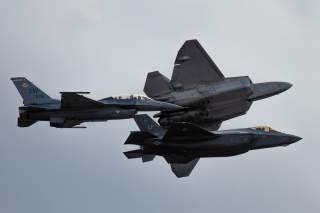 The Air Force is giving its 1970s-era F-16 fighter F-35 technology as part of a massive fleet-wide overhaul intended to improve targeting, attack precision and computer systems -- and extend the fighter’s combat life all the way into the 2040s.

Current Air Force F-16s have flown roughly 6-to-7 thousand flight hours, en route to the original plan to fly the planes out to 8,000 hours. Now, however, the Air Force plan is to fly the jets all the way out to 12,000 hours, given the extent of the combat upgrades.

The new AESA radar can track up to 20-targets at one time, Randy Howard, Lockheed Martin F-16 Director of Strategy and Business Development, told Warrior Maven.

“The F-16 is a much more capable weapon due to the AESA radar. We are taking lessons learned from the F-35 and rolling them back into the F-16. The ASEA is able to see a wide area laterally, horizontally, diagonally and vertically,” he told Warrior Maven

Howard added that the upgraded F-16s are getting a modern, state of the art targeting system and sniper system along with clear graphics and video into the cockpit. “Pilots can see targets farther,” Howard said.

The new F-16 also uses a high degree of increased on-board automation to free up pilot focus and workload. By automatically performing a range of important procedural functions independently, a pilot is then freed up to focus more intently on other mission critical tasks.

“Instead of being a display manager, the pilot is a tactician...his systems are making self-protection decisions for him faster, at the speed of a computer,” Howard said.

Part of the F-16 automation includes the use of a computerized Ground Collision Avoidance System, a technology which uses computer algorithms to autonomously re-route the plane in the event that a pilot is incapacitated. The computer system can, for instance, take over flight of the plane to avoid a collision with the ground, building or other structure. So far, Air Force and Lockheed officials report that the program has already saved seven lives and billions in aircraft costs.

“The effort, which is using AI to analyze decades of maintenance records, will wrap up in late Summer 2019. It is progressing towards delivering a predictive maintenance application,” Cronin said.

The aims of the effort, which include using real-time analytics to anticipate potential points of failure, are to both improve mission effectiveness and lower sustainment, repair and maintenance costs. If a pilot knows in advance when an engine or onboard system may malfunction, he or she can adjust the mission accordingly.

The aims of the program, Cronin specified, are to “anticipate future unscheduled events, provide part-level inventory visibility and track cost and performance.