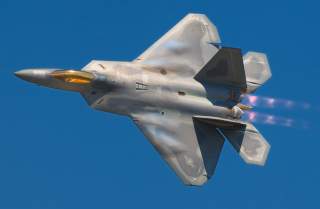 Almost every defense-industrial publication this month has covered the language in the House version of the 2017 National Defense Authorization bill which directs the Pentagon “to conduct a comprehensive assessment and study of the costs associated with resuming production of F-22 aircraft.” We could take out pick of stories from Defense News, Aviation Week, Inside Defense, or Politico Pro. The actual issue perhaps should not have been so newsworthy. In a note to investors this week, Byron Callan of Capital Alpha called the restart idea “a fantasy.” On the numbers, I’ll call it just a very questionable idea.

Why the enthusiasm the F-22A?

Some supporters believe strongly that it’s a better fighter than the F-35A. But when fielding a question at last Thursday's Royal Aeronautical Society dinner, Lt. Gen. Christopher Bogdan, the F-35 program manager, suggested asking pilots who have flown the both the F-22 and the F-35 which they’d prefer to take into combat. (The dinner, incidentally, was honoring the general for his work on the program.) The bigger problem may be economic. At issue is more than potentially alarming restart costs; the F-22s are very expensive to operate, and the USAF knows so. Back in 2013, the service released figures from its Air Force Cost and Performance (AFCAP) system that accounted for costs per flight hour. All such numbers are strongly subject to accounting conventions, accountants’ interpretations, and simply the number of hours flown in any year. These were average, and not marginal, costs. All the same, the differences were remarkable:

The F-15s, and particularly the older -C models, are expensive to fly simply because they’re old. The -C model F-16s aren’t just smaller, they’re generally newer too. The A-10Cs were built Republic tough, and were recently refurbished. The MQ-9As, however, are in a whole different category. Perhaps that’s why, as Reuters reported last week, drones have accounted this year for over 61 percent of all aerial weapons launched by the USAF over Afghanistan. In 2015, drones accounted for 56 percent; in 2011, the figure was just 5 percent.

Where does the F-35A fit in? It’s too early to tell, but Bogdan's office reported in February that the modest fleet of F-35s so far were costing about $42,200 to fly per hour. That’s already far less than the F-22A. As the fleet grows, and the Air Force becomes more accustomed to operating it, the average costs should drop considerably. Using common assumptions, the program office estimates that the long-term cost per flight hour of the F-35As will be much less than that of the F-22As, but still rather more than that of the F-16Cs that it will replace:

At a panel discussion hosted last week by the National Defense Industries Association (NDIA), Roger Zakheim of Covington & Burling argued that operations and maintenance (O&M) costs were eating the budget. In response, Camron Gorguinpour, director of transformational innovation for the USAF, mused about how about R&D now could help suppress O&M later. The problem in this regard with any stealthy aircraft is that it’s comparatively difficult to modify, and thus not a great target for mid-life R&D rescues. Buying more MQ-9s doesn’t fully address the problem either, because drones today not nearly as survivable in a big fight as a manned fighter. But whatever the Pentagon plans to buy next, ask next time how much of the R&D effort is being focused on suppressing the system’s long-term costs. The F-22A first flew in 1997, but we’re dealing with design decisions twenty years on.

James Hasík is a senior fellow at the Brent Scowcroft Center on International Security, where this piece first appeared, back in 2016.