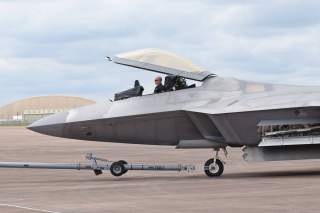 “Historically, these rates for the Raptors have been notoriously low, typically hovering around 50 percent."

Collins spoke to reporters during the Life Cycle Industry Days at Wright-Patterson Air Force Base in Ohio in mid-June 2019. He admitted the five front-line F-22 squadrons would fall short of 80-percent readiness.

“He did not give an official [readiness] figure, stating that the actual mission-capable rate for the F-22 fleet was classified,” The War Zone reporter Joe Trevithick noted.

“Historically, these rates for the Raptors have been notoriously low, typically hovering around 50 percent,” Trevithick added. “The actual full mission-capable rates, which refer to the percentage of the fleet that is, on average, capable of meeting all mission requirements, may have been substantially lower than this, as well.”

But "the [mission-capable] numbers are higher than they’ve ever been," Collins stressed in Ohio, according to Air Force magazine.

The F-22 force has benefited from a boost in maintenance spending, a recent fleet consolidation and simultaneous slow-down in operations. The Air Force in 2018 and 2019 shifted $750 million into maintenance accounts for the F-22 and F-16 fleets in the hope of meeting Mattis's goal.

The flying branch also withdrew F-22s from the Middle East, ending five years of continuous Raptor operations in the region. Older F-15C fighters and, later, stealthy F-35s took over for the F-22s.

After Hurricane Michael in October 2018 devastated Florida’s Tyndall Air Force Base, then home to 55 F-22s, the Air Force relocated one Tyndall-based training squadron and shut down the base’s front-line 95th Fighter Squadron, spreading the latter’s Raptors across five other combat units in Virginia, Alaska and Hawaii.

Spreading the 95th Fighter Squadron's 24 F-22s across the other five units allowed the surviving units to maintain 24 jets of their own. In fact, the five squadrons between them needed just seven extra Raptors to boost their inventories to 24 planes apiece.

The balance of the 95th's jets -- 17 Raptors -- likely are undergoing repairs for storm damage or are going into the Air Force's attrition reserve.

The redistribution of Raptors into fewer but larger squadrons, while potentially disruptive in the short term, ultimately could help maintainers to improve their mission-capable rate. "Larger, traditional Air Force squadrons and deployable units provide a better balance of equipment and personnel," the Government Accountability Office explained.

In addition to consolidating F-22s and spending more on squadron-level repairs, the Air Force has opened a third maintenance bay at Lockheed Martin’s depot in Marietta, Georgia, allowing the facility to work on F-22s “seven days a week,” Collins said.

He added that the Air Force has taken other measures to bolster F-22 readiness, but declined to elaborate. “We clearly see the benefits,” Collins said. He refused to predict when, or whether, the F-22 force would achieve 80-percent readiness.