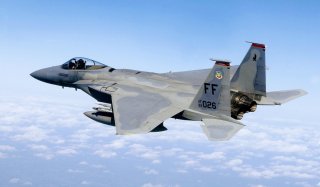 Air-to-air missiles, ground-fired weapons such as air defenses and approaching enemy aircraft all contain an electronic signature. This is a modern warfare reality now inspiring a U.S. Air Force effort to upgrade its F-15s with new electronic warfare (EW) weapons.

For the last several years, the service has been in the process of testing, engineering and integrating a new Eagle Passive/Active Warning and Survivability System (EPAWSS) into its fleet of F-15s to, quite simply, keep pace with fast-changing threats. By operating in passive or active mode, the EPAWSS can perform both offensive and defensive missions, such as finding and jamming enemy radio communications, detecting the electronic signature of incoming weapons or simply sustaining an EW-enabled operational presence.

Passive mode allows the EW system to in effect “listen” for enemy signatures while not giving off a signal itself. This can be of great significance given that once any kind of electromagnetic signal is emitted, there is naturally a risk that it could be found or detected by an enemy. At the same time, having an ability to operate in active mode is also critical as it can enable the aircraft to disable ground-firing systems, air attacks or even enemy drones. The EW war-footing draws upon various key techniques, such as finding what’s called a “line of bearing” or signal origin toward which to intercept or direct an attack.

These updated EW capabilities replace the Tactical Electronic Warfare Suite, which has been used since the 1980s, not long after the F-15 first deployed. The service plans to operate its F-15 fleet until the mid-2040’s, so an overhaul of the Eagle’s electronic systems helps maintain U.S. air supremacy. Boeing won the initial contract for the EPAWSS project several years ago and has since hired BAE Systems as the primary subcontractor.

As a fourth-generation fighter, an F-15 might run the risk of being more detectable to certain kinds of advanced modern enemy air defenses. However, if it is upgraded with advanced sensors, weapons and EW, it would certainly be much better able to operate combat missions in extremely high-threat scenarios.

The service report further specifies that EPAWSS can succeed in detecting RF and IR (infrared) threats by “acquiring accurate targeting information prior to threat engagement.”

Overall, the U.S. Air Force is vigorously upgrading the 1980s-era F-15 fighter by giving it new weapons and sensors in the hope of maintaining air-to-air superiority over its Chinese J-10 equivalent.

Among the upgrades is an ongoing effort to equip the F-15 with the fastest jet-computer processer in the world, called the Advanced Display Core Processor, or ADCPII. The computer, Boeing officials have told TNI, is capable of processing 87 billion instructions per second.