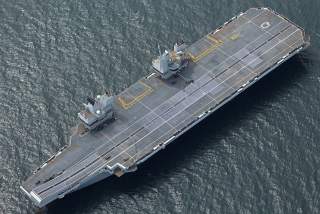 Will India’s next aircraft carrier be a British design?

British defense contractor BAE Systems is offering a Queen Elizabeth-class design as a contender for India’s third aircraft carrier, which will be built in India.

“BAE Systems has begun discussions with India regarding the potential for basing development of the second Indigenous Aircraft Carrier (IAC-2) project on the successful Queen Elizabeth Class design,” said a BAE statement. “The design is adaptable to offer either ski jump or catapult launch and can be modified to meet Indian Navy and local industry requirements.”

India currently operates one aircraft carrier, the 45,000-ton Vikramaditya, which is actually the former Soviet carrier Admiral Gorshkov. That ship has been plagued by engine problems as well as reliability issues with its MiG-29K fighters.

Under construction is India’s first indigenous carrier, the 40,000-ton Vikrant, while is scheduled to go to sea in 2020. But as is often the case with Indian-built defense projects, the vessel has suffered from problems such as massive cost overruns and disputes with Russian contractors who are supplying materials for the Indian-built ship.

But India wants a third and larger aircraft carrier, and BAE argues that its carrier would be ideal. “The UK carrier design has now been proven at sea and is a near match to the Indian Navy’s requirement for a 65,000-ton carrier with Integrated Full Electric Propulsion (IFEP), that could be constructed under the country’s ‘Make in India’ program,” a BAE representative said at recent Malaysian defense trade show, according to Australian Defense Magazine.

“Whether this be at government, Navy, prime or sub-contractor level,” he added. “The distributed build of a large complex carrier, having been successfully demonstrated in the UK, could potentially assist public and private Indian shipyards in sharing roles and responsibility for construction of this important strategic asset.”

The British carrier design would be an interesting choice for India. The big U.S. carriers, like the 100,000-ton Nimitz- and Ford-class vessels, use a Catapult-Assisted Takeoff But Arrested Recovery, or CATOBAR, system in which catapults fling airplanes off the deck, which then land by being captured by arresting wires across the deck. The two Queen Elizabeth-class vessels joining the Royal Navy use shorter “ski jump” flight decks for Short-Takeoff and Vertical Landing (STOVL) U.S.-made F-35B aircraft. The inclined bow of a ski jump carrier enables aircraft to climb sharply after takeoff without needing a catapult, with the planes then landing vertically like a helicopter. This enables a smaller-sized ship, though it also limits the carrier’s air group to STOVL aircraft.

India’s two existing carriers use a Short-Takeoff But Arrested Recovery, or STOBAR, system in which short-takeoff aircraft are launched off a ski jump flight deck, but are recovered using arresting wires like an American carrier. While simpler and cheaper than CATOBAR, it requires aircraft to be lighter and carry less payload.

Britain originally considered a CATOBAR system for its Queen Elizabeths, but ultimately opted for a less expensive STOVL carrier. BAE says that the design being offered to India can be built for catapult or ski jump operations.

One advantage of choosing the BAE design is that the Royal Navy and its contractors have fresh experience building two examples, which offers a chance to leverage expertise as well as economies of scale in materials. Another interesting question is what carrier aircraft India will choose for its new ship. Boeing has offered the F/A-18 Super Hornet and France’s Dassault is touting the Rafale fighter. Meanwhile, if India goes with a ski jump carrier like the Queen Elizabeths, then there is always the possibility of seeking F-35Bs like those used by the British carriers.