Aircraft Carriers vs. Submarines: Which Is the Ultimate Naval Weapon for War? 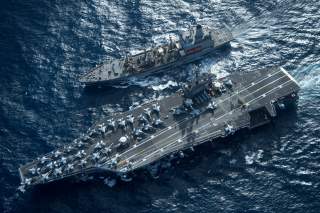 In combat, aircraft carriers are faster than submarines, and have a group of escorts (often including a submarine) intended for self defense. Carriers can also launch aircraft capable of detecting and attacking submarines at range, although the availability of these aircraft has waned since the end of the Cold War. For their part, submarines can strike carriers at ever greater distance with cruise missiles, and can increasingly utilize targeting data provided by offboard sensors to find their prey.

Submarines will remain relevant weapons of war as long as the sea offers a barrier to detection and to the use of weapons. Aircraft carriers will remain relevant as long as its useful to have mobile airfields. As both of these conditions seem likely to hold for the foreseeable future, carrier captains and sub skippers will still need to worry a great deal about one another.

Robert Farley, a frequent contributor to TNI, is a visiting professor at the United States Army War College. The views expressed are those of the author and do not necessarily reflect the official policy or position of the Department of the Army, Department of Defense, or the U.S. government.