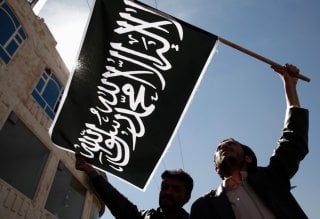 Al-Zawahiri Shares His Islamist Take On Hijab Row In India

The final third video was released on April 5, 2022, in which al-Zawahiri delivered a short speech. In it, he praised a Muslim Indian female student as “the noble woman of India” for refusing to remove her hijab, the traditional Islamic head covering, back in February 2022. 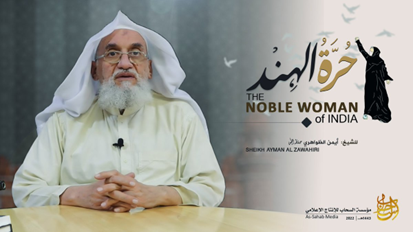 This is not the first time al-Zawahiri presented his Islamist take on hijab and framed the issue as part of the “crusader” war being waged against the ummah of Islam to force Muslims to renounce the doctrine of monotheism. In an August 7, 2019, video titled “The Battle of the Hijab,” al-Zawahiri warned Muslim women of the war raging against the ummah of Islam with the aim of forcing them to abandon their religion and their hijab. “Oh noble and honorable women, you are one of the first targets in the war against our Islamic ummah,” he said.

Through the nine-minute video, released with English subtitles by As-Sahab Media, al-Zawahiri praised the female Muslim student, Muskan Khan, for boldly defying the hijab ban and even recited a poem for her. “May Allah reward her for defending these principles with her hijab and her attachment to her religion, and for offering practical proof of the superiority of the Islamic Ummah -- in its creed, norms, and shariah -- over the creed of the polytheists and the moral degeneration of Western atheists,” al-Zawahiri announced. He also praised media operatives who had uncovered this incident, calling on them to continue to expose “injustice.”

Addressing Muslims in the Indian Subcontinent, he called on them to “stop being deceived by the mirage of the pagan Hindu democracy of India” which is “a tool to oppress Muslims.” He also decried Western countries, including France, Holland, and Switzerland, as well as Muslim-majority countries like Egypt and Morocco as “enemies of Islam” for banning hijab and waging “a war on Islam, its core doctrines, its laws, ethics, and etiquettes.”

Al-Zawahiri then suggested, “the way out is by holding on to our shariah, uniting as a single ummah, from China to the Islamic Maghreb, and from the Caucasus to Somalia; a united ummah facing a concerted war in several fronts.”

He also reminded Muslims in the Indian Subcontinent that the governments of Pakistan and Bangladesh are imposed on them, highlighting they “do not defend us; rather, they defend the very enemies that they have empowered them to fight against us.” In conclusion, al-Zawahiri shared a poem venerating “our mujahid sister” and saying that her Allahu Akbar (“Allah is the greatest”) chats were raised in India and echoed by believers in Jerusalem and Kashmir.

The video ended with an on-screen Ghazwat-ul-Hind hadith: “Two groups of my ummah have been saved from hellfire by Allah. The group that conquers the Indian Subcontinent and the group that will be with Jesus, the son of Mary.”

Al Qaeda Leader Must Not Be Overlooked

The aforementioned three appearances clearly show al-Zawahiri’s persistent attempts to propagate and revive his Islamist ideology in order to rejuvenate his group’s global jihad and present it as a defender of Muslims’ grievances. This dangerous guidance role is frequently overlooked or missed in our understanding of the survival of Al Qaeda’s global jihad. Recently, for instance, experts diverged over assessing the threat posed by Al Qaeda, while others shared views deeming al-Zawahiri as an uninfluential and impotent jihadi preacher and leader who had lost touch with global affiliates and even called for his retirement. Nevertheless, a careful examination of al-Zawahiri’s recent appearances and the Islamist messages he is propagating demonstrate that such views lack a proper understanding of Al Qaeda’s adaptation to the current reality.

Additionally, al-Zawahiri’s appearance refutes official assessments downplaying the role of Al Qaeda in Afghanistan and claiming it has been “restricted” by the Taliban, which in reality until this very moment has not broken its ties with Al Qaeda. While it is true that Al Qaeda will likely continue to lay low until the Taliban consolidates its grip, completes the establishment of its Islamist system in Afghanistan, and seeks international recognition, al-Zawahiri’s reappearance reveals a deliberate and premeditated effort to resume mentoring jihadis of a sprawling international network, resurrecting Bin Laden’s jihadi legacy, and spreading his Islamist ideology among young Muslims.

For this very reason, deeming al-Zawahiri as an impotent jihadi leader and overlooking his recent Islamist messages to jihadis and Muslims, particularly after the Taliban’s takeover of Afghanistan and rebranding it to be the ​​Islamic Emirate of Afghanistan, would drastically undermine efforts to address the underlying drivers of Al Qaeda’s survival, perception, and readiness for the next phase of its global jihad.

Romany Shaker is a research analyst monitoring global jihadi and terrorist groups. He is based in the Washington DC area where he previously worked for the Foundation for Defense of Democracies (FDD) and the Middle East Media Research Institute’s (MEMRI) Jihad and Terrorism Threat Monitoring (JTTM).