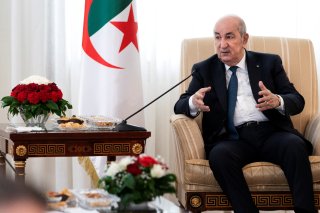 The government of Algeria announced on Wednesday that it would “immediately” suspend its friendship treaty with Spain, an agreement initially signed in 2002, over concerns about Madrid’s actions with regard to the disputed territory of Western Sahara in northwest Africa.

The statement, initially circulated by the office of Algerian president Abdelmajid Tebboune, announced Algeria’s withdrawal from the treaty after Spain’s “unjustifiable turnaround” on the Western Sahara issue, when Madrid chose to support neighboring Morocco’s claim to the territory. Tebboune’s office claimed that Spain had attempted to justify Morocco’s occupation of Western Sahara based on a “fait accompli” and described the Spanish Foreign Ministry’s arguments as “fallacious.” It went on to suggest that Spain was “contributing directly to the degradation of the situation in Western Sahara.”

“In consequence, Algeria has decided to proceed immediately with the suspension of the [friendship] treaty, which has served as the framework in the two countries’ ties,” it read.

The Spanish Foreign Ministry later indicated in a statement that it was aware of the Algerian decision and regretted it, but it would still continue its own commitment to the friendship treaty.

“The Spanish government regards Algeria as a friendly neighbor country,” the foreign ministry’s statement read, adding that Madrid “restates its complete readiness to keep and maintain the special … relationship between our two countries, to the benefit of the people of both.”

Algeria has long supported the Sahrawi Arab Democratic Republic, which occupies roughly twenty percent of the territory and disputes Morocco’s claim over the rest.

The crisis in Western Sahara, a former Spanish colony, arose in 1975 after Madrid withdrew from the territory as part of a decolonization scheme implemented by Spanish dictator Francisco Franco shortly before his death. During and after Spain’s withdrawal, Moroccan forces invaded and subsequently annexed its north, leading to battles with the Polisario Front, a rebel group composed of native Sahrawis and supported by Algeria. Following a ceasefire in 1991, the Polisario Front occupied a sliver of land in the territory’s east and formed the SADR, while Morocco consolidated its control over much of the west and fortified its position with a 1,700-mile sand wall dividing the two areas.

It is unclear what the consequences of the Spanish-Algerian feud over Western Sahara’s status will be. One potential area of contention could be Algeria’s gas exports to Spain, which account for roughly 40 percent of Spanish imports and could take on a larger role as exports from Russia dry up following extensive sanctions over the Kremlin’s invasion of Ukraine. Officials in Algiers have not suggested the political battle will affect Algeria’s exports, and Spanish foreign minister Jose Albares emphasized that the country was “well known for being a trustworthy supplier … and has given guarantees [of continued gas shipments] from the highest level of its government.”

The United States is the only country in the world to recognize Moroccan sovereignty over Western Sahara. Washington’s recognition was extended by former President Donald Trump after Morocco agreed to normalize its relations with Israel as part of the broader Abraham Accords in late 2020. The Biden administration has quietly maintained this recognition, although it has largely refrained from making public statements on the matter.