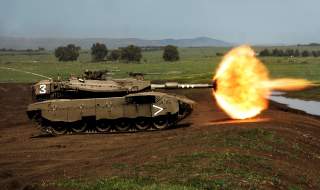 Key Point: The National Interest presents all of the reasons Israel is a dominant military power--over land.