All of the Reasons the U.S. Army Hated the M16A2 Rifle 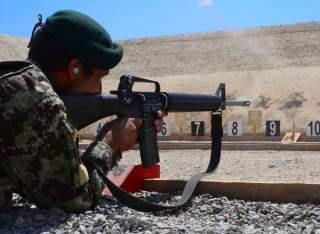 When the M16A2 was adopted in the 1980s, it could be seen as a rushed product. While the U.S. military needed a new rifle with the faster 1:7 twist to fire the new NATO standard SS109 round, the other changes the design added versus the M16A1 were a point of contention between the U.S. Army and U.S. Marine Corps. The Marines appreciated the readily dialable sight and smaller aperture on the M16A2, while the Army preferred the larger aperture and less adjustable sights on the M16A1. Due to this difference in opinion, the Marines were the first to receive the M16A2 in 1983, and the Army would only receive its first deliveries of the M16A2 in 1986.

The M16A2 also came at a time where infantry optics were beginning to become commonplace. The Austrian Bundesheer adopted the AUG with an integrated sight in 1977, the British Army would follow with the L85 in 1985. While optics such as the 3x Colt scope could be mounted in the carry handle of the M16A2, this was a less than ideal solution due to height over bore.

The combination of the Army’s dissatisfaction with the M16A2’s default sighting arrangement and the benefits of a lower optic mount lead the Army and Colt to collaborate on a “flat-top” upper receiver that could mount an infantry day or night optic on the same sightline as iron sights. The Army commissioned an “Enhanced M16A2” (as referred to by Infantry magazine) in September 1984. Internally, these rifles may have been known as the M16A2E1 or M16A2E3.

The M16A2E1 replaced the fixed iron sights of the standard M16A2 with folding variants. While the front sight remained attached to the front gas block, it was designed to fold down so as not to cast a shadow inside the field of view of a magnified optic mounted on the same sightline. A backup folding rear sight was designed that could fold flat onto the upper receiver, and the receiver was milled in a way similar to the future M1913 “Picatinny” rail standard, albeit with fewer slots. The backup rear sight was adjustable for elevation via a knob on the side of the rifle.

The M16A2E1s went through trials between 7 March to 23 May 1985 at the Army’s Armament Research and Development Center (ARDC). A variety of commercial scopes were trialed on the M16A2E1s, including early variants of non-magnified reflex sights and 2.5x and 6x optical sights. Regular fixed carry handle M16A2s were also included in the ARDC tests as control rifles. Infantry magazine stated that at the time, the ARDC test results would be used to determine if optical sights provided enough benefit to justify adopting the M16A2E1 over the original.

Evidently, the M16A2E1 did not provide enough benefit as the Army adopted the regular M16A2 in 1986. The upper receiver rail milling pattern appears to have been reused in the later Colt ACR, but the Colt ACR omitted the folding backup sight of the M16A2E1.

Flat top receivers would eventually come to the M16 in the M16A2E4, eventually adopted as the M16A4. The eventual MIL-STD-1913 rail is superior to the older M16A2E1 cut, as it allows for sights to be moved backward and forwards on the rail to account for different eye relief lengths on different sights. While an integrated backup sight was a good idea at the time, it was probably more versatile and cheaper for the Army to adopt rail-mounted backup iron sights as they did when the M16A4s and M4s entered service.

Ironically, the Canadians would beat the Americans to the punch in adopting the C7A1, the first flat-topped AR-style military rifle, in the late 1980s. The C7A1 was fielded with an Elcan optical sight, one of the optics trialed on the M16A2E1.

Information about the M16A2 taken from The Black Rifle II by Chris S. Bartocci and Infantry magazine, volume 75, September-October 1985.