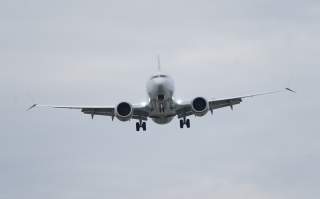 A former American Airlines mechanic who was arrested days before Sept. 11 for allegedly sabotaging an airplane — who at the time said the act was part of a labor dispute and because he wanted overtime — has terrorist ties and wanted Allah to harm non-Muslims, prosecutors said Wednesday.

Abdul-Majeed Marouf Ahmed Alani, who is originally from Iraq but gained U.S. citizenship, had Islamic State videos on his phone, said Allah wanted to hurt non-Muslims, and recently returned from a trip to Iraq, prosecutors said. The federal prosecutors presented the evidence at a bail hearing in Miami.

Alani allegedly sabotaged a Boeing 737 carrying 150 passengers in July. A sensor detected the problem just before takeoff, and Alani was then paid overtime to fix the problem. But video also showed him inserting styrofoam into sensitive plane components to cause the problem, an FBI affidavit stated. American Airlines suspended Alani, and subsequently fired him.

“Out of my evil side, I wanted to do something,” Alani admitted, according to Assistant U.S. Attorney Maria Medetis, The Associated Press reported.

He could face 20 years in prison for willfully disabling an aircraft, but has not been charged with terrorism.

His attorney, public defender Christian Dunham, asked for $200,000 bail, which he said would be secured by multiple relatives who are in the U.S. as well as former American Airlines co-workers, the AP reported.

“You may be very sympathetic to terrorists,” she said.

American Airlines has been engaged in a dispute with its unions, the Transport Workers Union of America and the International Association of Machinists and Aerospace Workers.

The airline went to court in August to allege that mechanics were intentionally slowing down work causing 900 flights to be canceled over the summer in order to gain leverage in contract negotiations. The judge ordered a permanent injunction against the union requiring it to work normally. The unions caused “enormous financial losses to American, and untold harm in lost customer good will,” American said in its filing, asking the judge to order the unions to pay for the canceled flights.

When Alani was arrested, he reportedly told investigators his efforts were part of this slowdown, and the arrest — coming days before the 18th anniversary of the Sept. 11 attack by jihadist terrorists — was reported in the press as a labor dispute.

“Alani explained to law enforcement that he was upset at the stalled contract dispute between the union workers and America Airlines, and that this dispute had affected him financially. Alani claimed that he tampered with the Target Aircraft in order to cause a delay or have the flight cancelled in anticipation of obtaining overtime work,” an FBI affidavit filed at the time of his arrest stated.

Gary Peterson, a vice president at the Transport Workers Union, told CNBC of the sabotage: “From a union standpoint we wouldn’t condone even the thought of doing this.”

Peterson did not respond to a request from the Daily Caller News Foundation about why, then, former colleagues were — according to Alani’s lawyer — willing to pay the bail for someone who said he sabotaged an aircraft as a result of the labor dispute.

The public defender, Dunham, did not return a request asking how many TWU members offered to pay his bail and what their names were.

“We are cooperating with federal authorities in this investigation. The safety of our customers and team members remains our top priority,” an American Airlines statement reads. “American Airlines suspended Mr. Alani immediately after he was charged, and was terminated soon thereafter.”