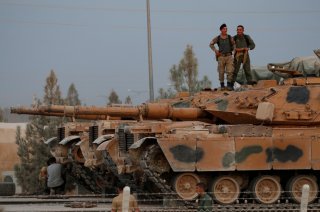 Turkey is developing a slew of indigenous weapon systems including stealth fighters and armed drones, seeking to reduce its dependency on foreign countries in an era when the domestic and foreign policies of President Recep Tayyip Erdogan have alienated allies in the United States and Europe.

But its program to develop a heavily armored main battle tank called the Altay also illustrates how its defense industry remains hamstrung by foreign sanctions on key technologies and clouded by byzantine industrial intrigues.

It’s in that context that in 2021 South Korea threw the stalled-out Altay program a badly needed lifeline, offering the engine technology necessary to literally make production-model Altays roll forward, per a Declaration of Intent this October. If integrated successfully, Turkey may finally be able to proceed with plans to build up 1,000 Altay tanks as well as export them to clients in the Middle East and Asia.

The Turkish Land Forces (TLF) is variously estimated to maintain between 2,500 and 3,000 main battle tanks of U.S. and German origin—a tradition dating back to World War II when Ankara received both German Panzers and American Sherman and Stuart tanks. Turkish tanks are actively engaged in a long-running conflict with Kurdish separatists and could be deployed if Turkey intervenes further in Libya, Syria, and Iraq; or be used in hypothetical conflicts with Greece, Armenia, or Russia.

But despite partial modernizations, the TLF’s Cold War-vintage M48, M60 Patton, and Leopard 1 and 2 tanks are growing long in the tooth. When Turkey committed armor to battles in Iraq and Syria in 2016-2018, Kurdish and ISIS militants recorded the destruction of numerous M60s and 8-10 Leopard 2A4s (the TLF’s most modern type).

Turkish plans to develop a domestic tank date back to the 1990s. In 2007, Ankara awarded $500 million to armored vehicle manufacturer Otokar to build four Altay tank protypes, named in homage to General Fahrettin Altay, who led the 5th Cavalry Corps behind Greek lines in the Battle of Dumlupinar.

The Altay amounted to an international hybrid: Germany would transfer tech for its 55-caliber Rh-120 gun, MTU833 engine, and RENK transmission, while South Korean firm Hyundai-Rotem contributed the turret design of its indigenous K2 Black Panther tank for $424 million.

However, the German tech-transfers fell through in the 2010s due to Erdogan’s increasingly authoritarian and nationalistic policies, tumultuous relations with Berlin, and especially Turkey’s military offensive against Kurdish forces in Syria.

While Turkey re-sourced gun technology from South Korea, Seoul too was struggling to perfect its own engine and transmission and installed German powerpacks in its early production of K2s.

Thus Turkey could not acquire or produce the engines needed to begin Altay production in 2016 as planned. Furthermore, plans to acquire armor technology used on the French Leclerc tank ran aground due to Ankara’s worsening maritime disputes with Paris.

Nonetheless, in November 2018, Ankara awarded a $3.5 billion contract for production and life-cycle support of 251 Altays—not to Altay-designer and prototype-builder Otokar, but to manufacturer BMC, jointly owned by Qatar and Ethem Sancek, a close political ally of Erdogan.

The deal was further clouded with controversy when Erdogan gave a state-owned tank factory to BMC for free to avoid factory construction costs. Some critics allege BMC lacks the experience needed to rapidly carry out Altay production, and think it ominous that Sancek sold his BMC shares this summer.

Still Altay seemed to gain traction in early 2021 when South Korea announced it would supply its perfected indigenous DV27K diesel engine and EST15K transmission by companies Doosan and S&T Dynamics.

But, in 2020, the same EST15K transmission was again refused for installation on South Korea’s K2 tank for having failed the 10,000-kilometer breakdown-free standard set by the South Korean military. Indeed, in August 2021, South Korea’s Defense Acquisition Program Administration agency requested contractors develop an improved version of the transmission. But because Turkey has a lower 6,700-kilometer standard, it accepted the current version anyway. To be fair, some allege the EST15K’s most recent test failure was due to a minor error rather than a major intrinsic flaw.

If forthcoming integration proves satisfactory, Altay deliveries could begin in 2023. Meanwhile, BMC is also still developing a 1,500 horsepower V12 engine called Batu which could eventually replace the Korean powerpack on Altay and even be uprated to 1,800 horsepower. But Batu remains years away from completing development.

Possibly the world’s most expensive tank with a unit price of $13.75 million, the Altay resembles yet another heavy Western-style main battle tank like the Leopard 2, M1 Abrams and Challenger 2. It’s large and heavily armored at between sixty-five and seventy-two tons, has a crew of four (commander, driver, gunner, and loader), mounts a powerful 120-millimeter gun, and can accelerate to 40 miles per hour thanks to a powerful 1,500-horsepower engine.

Additional features include auxiliary power units (so tank systems can remain “on” with the engine off), automatic fire suppression systems, protection from chemical/biological/radiological/nuclear threats, and a wading kit allowing traversal of water obstacles up to 4 meters deep.

Both commander and gunner benefit from panoramic thermal/electro-optical sights, and the tank’s Aselsan-built Vulkan III digital fire control system incorporates a laser rangefinder and hunter-killer capability to automatically track targets and ensure a high first-round hit probability. Secondary armament includes a coaxial 7.62-millimeter machinegun and a remotely-control 7.62 or 12.7-millimeter gun on the turret.

However, the Altay was revised (as you can see here) with new armor and active defense systems reflecting lessons painfully learned by the TLF in Syria. Notably, it includes the Akkor (“Incandescent”) Active Protection System by Aselsan, which uses four radar panels to provide 360-degree early warning of short-range anti-tank rockets and long-range anti-tank guided missiles (ATGMs). It then attempts to shoot them down before they impact the tank using two rotating launchers each carrying two defensive counter-munitions.

Additionally, it has a sensor that not only detects missile-targeting lasers (as used by the deadly Russian Kornet system) but also automatically discharges specialized smoke grenades to break line-of-effect. The Akkor is evolved from the PULAT system rapidly installed on M60T tanks as field-expedient, which in turn was derived from the Ukrainian Zaslon-L APS.

Altay also now features armor by Roketsan made of boron carbide, the third-hardest substance on Earth, of which Turkey happens to have nearly three-quarters of the world’s reserves. Boron also has a high melting temperature of 2,763 degrees Celsius but is problematically brittle. However, the Altay’s armor sandwiches the material in between plates of aluminum alloy or steel to form a Non-Explosive Reactive Armor (NERA) designed to divert and warp the penetrating “darts” of kinetic shells.

Turkish defense editor Yusuf Mettin details that the Altay’s front and upper side turret will have 800 millimeters of NERA armor, while the lower side incorporates spaced armor and explosive reactive armor bricks for the equivalent of 500-600mm rolled homogeneous armor (RHA) equivalent versus kinetic shells. Mettin also emphasizes that the Altay’s top armor is unusually robust (150mm RHA equivalent) to protect against the rapid-firing cannons used by ground-attack aircraft and helicopters.

Three Altay variants are currently on order, starting with forty basic T1 models. These will be followed by 210 T2s integrating a gun-fired, laser-guided anti-tank missile capability (perhaps based on the Turkish UMTAS air-to-surface missile), a mobile net-camouflage system, crew training mode, and perhaps BMC’s Batu engine if it’s ready. Supposedly this version may also finally include separate stowage for ammunition in the hull, a feature greatly increasing crew survivability in the Abrams tank.

The lead order also includes a single T3 prototype with an unmanned turret and autoloading gun—a nod to the avant-garde concepts in Russia’s T-14 Armata tank.

If all goes well, Ankara plans to recapitalize its entire tank fleet with three more Altay batch orders for a total of 1,000 tanks, before moving on to a future unmanned tank. BMC is also working to refit Turkish Leopard 2A4 tanks with Altay turrets and demonstrated such a “Leotay” in 2021. Ankara also hopes to export the Altay abroad, starting with 100 on order from Qatar. Other potential clients include Saudi Arabia, Azerbaijan, Oman, and Pakistan.

However, these ambitious plans depend on the new Korean engine and transmission unstopping the automotive bottleneck which has delayed production of the Turkish tank for years.