Amen: The Secretary of the Air Force Says the F-35 Is Here to Stay 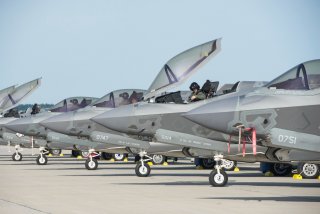 The Secretary of the Air Force says the F-35 stealth fighter jet is here to stay for decades in large numbers because it is “such a superior platform” with a “high operational value compared to its cost.”

Air Force Secretary Frank Kendall is in a position to know, as he was the Pentagon’s acquisition chief during crucial years of the F-35 program when the effort essentially kicked into high-gear and became a high-performing successful acquisition effort. Much of this transition for the F-35 program took place during his tenure as acquisition chief at the Pentagon. Many credit his involvement and leadership as critical to the successful program turnaround.

Given all this, Kendall knows the F-35 from a programmatic as well as a technical perspective, and even amid political flurry about sustainment costs of the jet, he took a strong, clear position in support of the value-added attributes of the aircraft.

“The F-35 is such a superior platform. Its operational value is high compared to its cost,” Kendall told reporters at the 2021 Air Force Association Symposium.

During Kendall’s time as Pentagon Acquisition Chief, which spanned several years from 2010 through 2017, the F-35 passed a handful of successful developmental milestones to include breakthrough software integration, massive computer upgrades, and the advent of a continuous development modernization program to ensure that the F-35 remains superior well into the 2070s and beyond. Currently, as Secretary of the Air Force, Kendall expressed enthusiasm for current engine improvement initiatives intended to add fuel savings and an increase in thrust for the stealth fighter.

None of this seemed to mean Kendall was unaware of things that could be improved in the F-35 program, as he made a point to say continued efforts to lower costs were needed.

“Cost of sustainment has been high for a long time, so there is room for improvement. We can do better. I’m a big believer in putting financial pressure on to create strong incentives. We are using that as a vehicle to get control of some of the intellectual property,”  Kendall said.