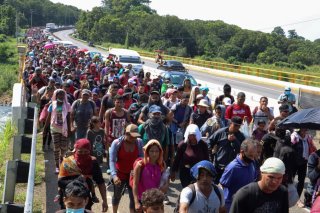 The United States must face the crisis building in the Western Hemisphere. Currently, there are thousands of refugees accumulating in Colombia preparing for their walk to the United States. The journey begins with a boat ride from Necoclí, Colombia, to the shores of Panama. The next stage takes migrants through the Darién Gap, a tropical jungle area with nearly 50 miles of swamp in one section and mountains that offer over 6,000 feet of elevation change from valley to summit in another. For context, the Pan-American Highway, which stretches over 29,000 miles from Alaska to Argentina, has only one gap, a 66-mile stretch through Darién Gap.

According to Panamanian officials, in the first nine months of 2021, around 95,000 migrants have entered the gap headed for the United States, and one in five were children. There are another reported 20,000 people in Necoclí waiting for a boat seat. Panamanian foreign minister Erika Mouynes says 1,000 migrants enter Darién every day, and this is a significant leap from the decades-long trend of few thousand a year.

The dangers posed by the terrain, wildlife, and human traffickers no longer deter migrants from risking the arduous journey. According to the International Organization for Migration, at least fifty bodies have been found in the Darién this year and estimate the number of deaths to be at least four times higher. Since April, 245 cases of sexual assault have been documented in the Darién by Doctors Without Borders.

All of this occurs in stage one of the journey. If a migrant survives the Darién, there are still another 2,700 miles between them and Del Rio, Texas. After the optical disaster of Border Patrol agents on horseback whipping Haitian migrants attempting to enter the United States, the Biden administration should alter its approach.

The situation is also dire in Haiti; people are willing to cross one of the most uninhabited regions on the planet only to walk another 2,700 miles. The threat of deportation isn't going to overpower their desperation.

Instead of waiting to turn people away at the border and putting out a broad warning not to come, the strategy should be proactive. The Biden administration must develop a dynamic rather than reactive approach that adheres to international law for asylum seekers.

The Biden administration continues to advance its narrative of a more rigorous diplomatic engagement approach to relationships, and it should start close to home. With nearly 100,000 migrants headed for the southern border following a hellacious journey and no viable life to return to, only genuine compassion and engagement can spare the Biden administration another optics nightmare.

The Biden administration announced plans to double the number of asylum officers, but the increase will only help deal with the backlog, not fix the underlining issue. Under U.S. immigration law, a person seeking asylum must do so from within the United States. Despite any claims to the contrary, asylum cannot be granted at any U.S. embassy or consulate. As a result, no deportation threats will stem the flow of migrants as reaching U.S. soil is their only option.

The Biden administration must address this legal hurdle. Then the United States should coordinate with Mexico, Panama, and Colombia to open asylum offices. Only the ability to process asylum seekers before they reach the U.S. border will slow the flow of migrants. It is in the U.S. interest to get ahead of this issue. No good can come from remaining reactive at the U.S. border.

Furthermore, the United States must adjust its rationale and method for engagement throughout the hemisphere. Like in the Middle East, U.S. engagement in Latin America has revolved around a singular focus that it chose to address through weapons sales. Rather than terrorism as in the Middle East, Latin America has been ground zero for the drug war against the NARCOS. The weapons-based approach has over-militarized local police who have on some occasion committed equally atrocious acts of violence against civilians as the NARCOS themselves.

If the United States wants to preempt a border crisis where the Biden administration will face a no-win situation, Washington must change its approach to Latin America. The drug war has failed, and the Biden administration must replace a Latin America policy that prioritizes the pursuit of narcotics manufacturers and traffickers with one that builds economic relationships.

A border region free from a migrant crisis is in the U.S. interest. However, blanket threats of deportation and violent clashes with border patrol don't address the issue when the only option to seek asylum requires a physical presence on U.S. soil. The immediate future requires adjustments to the asylum process, aiming to spare the unnecessary loss of human life along the treacherous journey through central and south America. Beyond that, the Biden administration should alter its hemispherical approach. Biden should discard the failed U.S. drug war and instead transform the Monroe Doctrine from a warning for foreign powers into an ideal based on diplomatic and economic engagement.