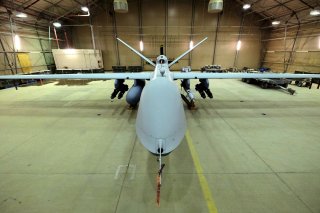 The United States developed the Hellfire family of missiles in the 1980s. The tank-buster weapon was developed specifically to counter Soviet armor formations but continues to be in service today. The missile’s twenty-pound warhead comes in several different variants, including high explosive anti-tank, fragmentation, and incendiary warheads. The diversity of Hellfire missile types are why it has been so widely exported, particularly to America and its North Atlantic Treaty Organization allies.

One of the Hellfire’s more typical platforms is the MQ-9 Reaper drone. But Hellfires fired from drones presents a problem in urban areas where collateral damage is a concern. The solution to protecting innocent bystanders and infrastructure from being harmed? Remove the explosive warhead and replace it with razor-sharp blades.

The Hellfire “ninja variant” relies on kinetic energy rather than explosive power to take out targets. To that end, the R9X variant has six spring-loaded blades that pop out just before impact, which creates a deadly ring of destruction. The missile is said to be highly accurate as well, and supposedly has a “left seat, right seat” targeting capability that can target not just individual vehicles, but individuals in vehicles. The missile is said to be used by the Central Intelligence Agency and the Joint Special Operations Command.

According to images and reports on social media, the United States targeted a military trainer with links to Al-Qaeda near Sarmada in Idlib, in northwestern Syria just last week. The trainer apparently had been driving or sitting in a Hyundai SUV when it was struck by the modified Hellfire missile.

The front section of the SUV, including the driver side door, windshield, and forward section of the roof, were severely damaged. However, the Hyundai did not appear to catch fire or burn, evidence that strongly supports the use of the explosive-less R9X.

It’s not the first time that the R9X has been used in Syria. In 2017, another strike was carried out, also in Idlib, and showed the same characteristic broken glass and roof sans burn marks consistent with the R9X. In fact, in 2019, another R9X was used in much the same fashion, targeting another trainer in Syria.

The increasing regularity with which the R9X seems to be used suggests that the missile’s pinpoint accuracy has been a boon to the Pentagon in situations where it wants to avoid collateral damage. This is not the last time we’ll see evidence of the R9X.