America’s Next Fighter Jet Will Have a Drone Sidekick 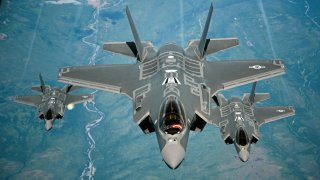 Although the United States’ sixth-generation fighter jet is not yet in service, it is clear that the drones it will fly with will be just as important as the jet itself. However, what remains to be seen is how the development processes for the drones will unfold.

During the Trump administration, the U.S. Air Force showed an interest in developing future sixth-generation aircraft along the lines of the Century Series—a group of American fighters, models designated F-100 to F-106, that were rapidly developed, put into production, and moved into service.

“The idea of the Digital Century Series is that you’re able to rapidly iterate designs. So you can make a lot of design progress in a short period of time, because you’re doing multiple design activities, in close proximity and/or simultaneously,” Andrew Hunter, the Air Force’s top acquisition official, said at the Air Force’s Life Cycle Industry Days conference in August, Breaking Defense reports.

“I could see that approach being potentially really successful for a space where we think the design is going to need to iterate or could iterate quite a bit in a short period of time. And I would look at the Collaborative Combat Aircraft scenario where that could be the case,” he said. “We might ultimately decide that, that we want to pursue multiple approaches, at least up to a certain point. And that would be an area where that model could be relevant,” Hunter added.

However, one of the most significant limiting factors will be the ultimate size of the Air Force’s budget.

“We are resource-constrained, and we are focused very much on capability,” Hunter said. “So we can’t afford to do four different kinds [of warplanes] where none of which actually develops into an operational capability.”

The sixth-generation fighter currently in the research and development stage is expected to offer significant advantages over the current crop of fifth-generation aircraft. In addition to being harder to detect by radar, the aircraft are expected to operate in tandem with multiple unmanned aerial vehicles while directing their movements and actions.

The U.S. Air Force is investing large sums of money into developing the technology that would go into the United States' first fleet of semi-autonomous combat drones. Going forward, America’s flying branch will have to make consequential decisions on the specific types of drones it adopts.

One of the better-known Air Force drone programs is the Skyborg program. This initiative hopes to develop what is known in Air Force parlance as the Autonomy Core System (ACS)—essentially a control system for drones that can be swapped across platforms.

The Air Force used Skyborg’s ACS in flight for the first time during the spring of last year, when the ACS flew a Kratos UTAP-22 Mako drone, followed by General Atomics’ MQ-20 Avenger in the summer. Earlier this summer, the Kratos XQ-58A Valkyrie drone also flew with the technology.