America and China's Great AI Competition: What Is Driving It 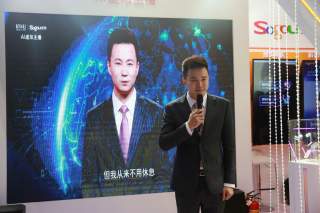 For better or worse, the advancement and diffusion of artificial intelligence technology will come to define this century. Whether that statement should fill your soul with terror or delight remains a matter of intense debate. Techno-idealists and doomsdayers will paint their respective utopian and dystopian visions of machine-kind, making the leap from what we know now as "narrow AI" to "general AI" to surpass human cognition within our lifetime. On the opposite end of the spectrum, yawning skeptics will point to Siri's slow intellect and the human instinct of Capt. Chesley "Sully" Sullenberger – the pilot of the US Airways flight that successfully landed on the Hudson River in 2009 – to wave off AI chatter as a heap of hype not worth losing sleep over.

The fact is that the development of AI – a catch-all term that encompasses neural networks and machine learning and deep learning technologies – has the potential to fundamentally transform civilian and military life in the coming decades. Regardless of whether you're a businessperson pondering your next investment, an entrepreneur eyeing an emerging opportunity, a policymaker grappling with regulation or simply a citizen operating in an increasingly tech-driven society, AI is a global force that demands your attention.

Willingly or not, even the deepest skeptics are feeding the AI force nearly every minute of every day. Every Google (or Baidu) search, Twitter (or Weibo) post, Facebook (or Tencent) ad and Amazon (or Alibaba) purchase is another click creating mountains of data – some 2.2. billion gigabytes globally every day – that companies are using to train their algorithms to anticipate and mimic human behavior. This creates a virtuous (or vicious, depending on your perspective) cycle: the more users engage with everyday technology platforms, the more data is collected; the more data that's collected, the more the product improves; the more competitive the product, the more users and billions of dollars in investment it will attract; a growing number of users means more data can be collected, and the loop continues.

And unlike previous AI busts, the development of this technology is occurring amid rapidly advancing computing power, where the use of graphical processing units (GPUs) and development of custom computer chips is giving AI developers increasingly potent hardware to drive up efficiency and drive down cost in training their algorithms. To help fuel advancements in AI hardware and software, AI investment is also growing at a rapid pace.

The Geopolitical Backdrop to the Global AI Race

AI is both a driver and a consequence of structural forces reshaping the global order. Aging demographics – an unprecedented and largely irreversible global phenomenon – is a catalyst for AI development. As populations age and shrink, financial burdens on the state mount and labor productivity slows, sapping economic growth over time. Advanced industrial economies already struggling to cope with the ill effects of aging demographics with governments that are politically squeamish toward immigration will relentlessly look to machine learning technologies to increase productivity and economic growth in the face of growing labor constraints.

The global race for AI supremacy will feature prominently in a budding great power competition between the United States and China. China was shocked in 2016 when Google DeepMind's AlphaGo beat the world champion of Go, an ancient Chinese strategy game (Chinese AI state planners dubbed the event their "Sputnik moment"), and has been deeply shaken by U.S. President Donald Trump's trade wars and the West's growing imperative to keep sensitive technology out of Chinese competitors' hands. Just in the past couple of years alone, China's state focus on AI development has skyrocketed to ensure its technological drive won't suffer a short circuit due to its competition with the United States.

Do or Die for Beijing

The United States, for now, has the lead in AI development when it comes to hardware, research and development, and a dynamic commercial AI sector. China, by the sheer size of its population, has a much larger data pool, but is critically lagging behind the United States in semiconductor development. Beijing, however, is not lacking in motivation in its bid to overtake the United States as the premier global AI leader by 2030. And while that timeline may appear aggressive, China's ambitious development in AI in the coming years will be unfettered by the growing ethical, privacy and antitrust concerns occupying the West. China is also throwing hundreds of billions of dollars into fulfilling its AI mission, both in collaboration with its standing tech champions and by encouraging the rise of unicorns, or privately held startups valued at $1 billion or more.

By incubating and rewarding more and more startups, Beijing is finding a balance between focusing its national champions on the technologies most critical to the state (sometimes by taking an equity stake in the company) without stifling innovation. In the United States, on the other hand, it would be disingenuous to label U.S.-based multinational firms, which park most of their corporate profits overseas, as true "national" champions. Instead of the state taking the lead in funding high-risk and big-impact research in emerging technologies as it has in the past, the roles in the West have been flipped; private tech companies are in the driver's seat while the state is lunging at the steering wheel, trying desperately to keep China in its rear view.

The United States may have thought its days of fighting globe-spanning ideological battles ended with the Cold War. Not so. AI development is spawning a new ideological battlefield between the United States and China, pitting the West's notion of liberal democracy against China's emerging brand of digital authoritarianism. As neuroscientist Nicholas Wright highlights in his article, "How Artificial Intelligence Will Reshape the Global Order," China's 2017 AI development plan "describes how the ability to predict and grasp group cognition means 'AI brings new opportunities for social construction.'" Central to this strategic initiative is China's diffusion of a "social credit system" (which is set to be fully operational by 2020) that would assign a score based on a citizen's daily activities to determine everything from airfare class and loan eligibility to what schools your kids are allowed to attend. It's a tech-powered, state-driven approach to parse model citizens from the deplorables, so to speak.

The ability to harness AI-powered facial recognition and surveillance data to shape social behavior is an appealing tool, not just for Beijing, but for other politically paranoid states that are hungry for an alternative path to stability and are underwhelmed by the West's messy track record in promoting democracy. Wright describes how Beijing has exported its Great Firewall model to Thailand and Vietnam to barricade the internet while also supplying surveillance technology to the likes of Iran, Russia, Ethiopia, Zimbabwe, Zambia and Malaysia. Not only does this aid China's goal of providing an alternative to a U.S.-led global order, but it widens China's access to even wider data pools around the globe to hone its own technological prowess.

Not wanting to be left behind in this AI great power race, Europe and Russia are hustling to catch up, but they will struggle in the end to keep pace with the United States and China. Russian President Vladimir Putin made headlines last year when he told an audience of Russian youths that whoever rules AI will rule the world. But the reality of Russia's capital constraints means Russia will have to choose carefully where it puts its rubles. Moscow will apply a heavy focus on AI military applications and will rely on cyber espionage and theft to try and find shortcuts to AI development, all while trying to maintain its strategic alignment with China to challenge the United States.

While France harbors ambitious plans to develop an AI ecosystem for Europe and Germany frets over losing its industrial edge to U.S. and Chinese tech competitors, unavoidable and growing fractures within the European Union will hamper Europe's ability to play a leading AI role on the world stage. The European Union's cumbersome regulatory environment and fragmented digital market has been prohibitive for tech startups, a fact reflected in the European Union's low global share and value of unicorn companies. Meanwhile, the United Kingdom, home to Europe's largest pool of tech talent, will be keen on unshackling itself from the European Union's investment-inhibitive regulations as it stumbles out of the bloc.

A Battle over Talent and Standards

But wherever pockets of tech innovation already exist on the Continent, those relatively few companies and individuals are already prime targets for U.S. and Chinese tech juggernauts prowling the globe for AI talent. AI experts are a precious global commodity. According to a 2018 study by Element AI, there are roughly 22,000 doctorate-level researchers in the world, but only around 3,000 are actually looking for work and around 5,400 are presenting their research at AI conferences. U.S. and Chinese tech giants are using a variety of means – mergers and acquisitions, aggressive poaching, launchings labs in cities like Paris, Montreal and Taiwan – to gobble up this tiny talent pool.

Even as Europe struggles to build up its own tech champions, the European Union can use its market size and conscientious approach to ethics, privacy and competition to push back on encroaching tech giants through hefty fines, data localization and privacy rules, taxation and investment restrictions. The bloc's rollout of its General Data Protection Regulation (GDPR) is designed to give Europeans more control over their personal data by limiting data storage times, deleting data on request and monitoring for data breaches. While big-tech firms have the means to adapt and pay fines, the move threatens to cripple smaller firms struggling to comply with the high cost of compliance. It also fundamentally restricts the continental data flows needed to fuel Europe's AI startup culture.