America Can Be a Model for Ukrainian Reform 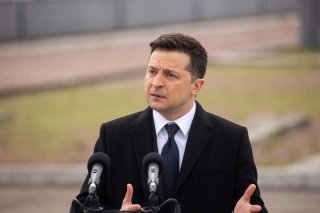 “Unwavering support for Ukraine’s Sovereignty and territorial integrity.” That was the pledge recently given by President Joe Biden to his Ukrainian counterpart, Volodymyr Zelensky, against the backdrop of Russia's escalation of the long-simmering armed conflict in eastern Ukraine. The recent, credible threat of renewed Russian aggression—manifested through a major, and overt, Russian military mobilization along the country’s common border with Ukraine—has drawn concern in Kyiv and European capitals and added urgency to the need for a serious, coordinated approach toward Russia. As such, Biden’s remarks signal a welcome willingness to deter aggression aimed at Ukraine. Yet it is likewise clear that a more robust relationship between the two countries is needed if serious progress is to be made in the region.

Indeed, despite significant support, the United States has stopped short of committing to a full-fledged alliance with Ukraine. Substantial economic and military cooperation have yet to be established, and that shortfall has given the Kremlin outsized influence over Ukraine’s geopolitical trajectory.

The impediments are well-known. President Biden himself has stressed that anti-corruption efforts are “central to Ukraine’s Euro–Atlantic aspirations.” As such, a stronger U.S.-Ukrainian relationship depends on a series of far-reaching systemic reforms of Ukrainian government institutions—along with clear metrics for implementation and emphasis on the rule of law. Such steps, backed by U.S. aid and clear support from Washington, have the power to reset the bilateral relationship and dramatically strengthen Ukraine’s Euro-Atlantic trajectory.

Here, America can serve as a model. To root out deeply embedded corruption and prevent a reversion to post-Soviet kleptocracy, Ukraine needs to model new laws on existing U.S. legislation and anti-corruption efforts. That work, paradoxically, must start with the Prosecutor General’s Office, which has been a historic institutional obstacle to reform. Its complete disbanding and subsequent reformulation should be given serious consideration as part of any reform effort, much the same way the country’s police force was reconstituted half a decade ago.

The Security Service of Ukraine (SBU) likewise needs radical reform. Despite its relative effectiveness against Russian aggression since 2014, the organization still carries a well-deserved reputation for corruption. Nor does a bill on SBU recently adopted by the Rada, Ukraine’s parliament, go far enough. This, in turn, provides an opening for enhanced cooperation with Washington. Expert U.S. advice on the legislation, along with operational training and support, can help transform the SBU into a truly effective and trusted intelligence/counterintelligence service.

The Ministry of Defense and the country’s Armed Forces are in a similar situation. Various factors, including a residual Soviet military mentality, have hampered real attempts at reform of those institutions—and have hindered the creation of a formidable military force capable of being interoperable with NATO, or of giving Ukraine the ability to truly deter Russian military aggression. More proactive participation by the United States in determining the direction and implementation of such reforms, as well as increased military cooperation between the two countries, can rapidly yield positive results in this domain.

A residual Soviet mentality is also embedded in the current Ukrainian Constitution. The document is burdened with extensive social commitments, such as rights to housing, work, and health care—things that put an economic and regulatory burden on the government which it has long found difficult to fulfill.

These obsolete holdovers from a bygone era affect all branches of government. The old “Soviet Socialist'” model of governance makes effective institutional reforms impossible. The constitution should become an organic social contract between the government and citizens of Ukraine based on the principle of liberty—the same principle which was present during the 2014 Maidan Revolution. The U.S. Constitution, in turn, is an excellent model for the direction and structural framework that Ukrainian reforms should follow. It is a path that the United States, with its wealth of non-governmental organizations and democracy-building institutions, can help to guide properly.

In order to bring all of these reforms to fruition, however, American cooperation with the Ukrainian parliament is vital. It is the Ukrainian parliament that will play a key role in implementing these changes, and parliamentary parties will be the ones to pass legislation launching reforms of all branches of government. It is up to Ukraine’s legislature to enact laws that will eradicate toxic practices from the governance of the country and to adopt a new constitution enshrining democratic principles.

If President Biden and his administration are serious about supporting Ukraine’s sovereignty and territorial integrity, the United States needs to establish stronger bilateral ties with Ukraine. Washington and Kyiv should work together to establish a clear “rules-based” approach for making Ukraine a mature nation-state. By serving as a model for Ukraine in its efforts to reform and eliminate corruption, America would help not only bring the country more in line with the Euro-Atlantic community but also help build resilience (and deterrence) against an increasingly aggressive Russia. That is an objective which Washington and Kyiv both seek.

Anatolii Pinchuk is President of Ukrainian Strategy, a Ukrainian public association, as well as Head of the Board of Directors of the Eastern Europe Security Institute and an Advisor to the U.S. Caucus in the Supreme Rada of Ukraine.

Max Karyzhsky is a Project Director at Ukrainian Strategy.