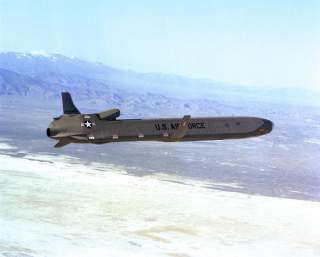 US Air Force weapons developers are working with industry to pursue early prototypes of a new air-launched, nuclear-armed cruise missile able to pinpoint targets with possible attacks from much farther ranges than bombers can typically attack.

Service engineers and weapons architects are now working with industry partners on early concepts, configurations and prototypes for the weapon - which is slated to be operational by the end of the next decade - late 2020s.

The Air Force awarded two $900 million LRSO deals last year to both Raytheon and Lockheed Martin as a key step toward selecting one vendor for the next phase of the weapon's development. Due to fast growing emerging threats, the Air Force now envisions an operational LRSO by the end of the 2020s - as opposed to prior thoughts they it may not be ready until the 2030s.

While many details of the weapons progress are not available naturally for security reasons, Air Force officials tell Warrior Maven that plans to move into the Engineering and Manufacturing Development phase are on track for 2022.

A cruise missile armed with nuclear weapons could, among many things, potentially hold targets at risk which might be inaccessible to even stealth bombers in some instances.

As a result, senior Air Force leaders continue to argue that engineering a new, modern Long-Range Standoff weapons with nuclear capability may be one of a very few assets, weapons or platforms able to penetrate emerging high-tech air defenses. Such an ability is, as a result, deemed crucial to nuclear deterrence and the commensurate need to prevent major-power warfare.

“There may be defenses that are just too hard. They can be so redundant that penetrating bombers becomes a challenge. But with standoff (enabled by long-range LRSO), I can make holes and gaps to allow a penetrating bomber to get in,” Lt. Gen. Stephen Wilson, former Commander of Air Force Global Strike Command, (and Current Vice Chief of Staff of the Air Force) told the Mitchell Institute in 2014.

“Stealthy bombers equipped with numerous stealthy LRSOs would - in the eye of an adversary - be the perfect surprise attack weapon,” Kristensen said.

“LRSO will limit escalations through all stages of potential conflict,” Robert Scher, former Sec. of Defense for Strategy, Plans and Capabilities, told Congress in 2015, according to a report from the Federation of American Scientists.

In fact, this kind of thinking is analogous to what is written in the current administration’s Nuclear Posture Review which, among other things, calls for several new low-yield nuclear weapons options to increase deterrence amid fast-emerging threats. While discussing these new weapons options, which include a lower-yield submarine-launched nuclear weapon, Defense Secretary James Mattis told Congress the additional attack possibilities might help bring Russia back to the negotiating table regarding its violations of the INF Treaty.

Unlike the ALCM which fires from the B-52, the LRSO will be configured to fire from B-2 and B-21 bombers as well, service officials said; both the ALCM and LRSO are designed to fire both conventional and nuclear weapons.

The rapid evolution of better networked, longer-range, digital air-defenses using much faster computer processing power will continue to make even stealth attack platforms more vulnerable; current and emerging air defenses, such as Russian-built S-300s and S-400s are able to be cued by lower-frequency “surveillance radar” -- which can simply detect that an enemy aircraft is in the vicinity -- and higher-frequency “engagement radar” capability. This technology enables air defenses to detect targets at much farther ranges on a much larger number of frequencies including UHF, L-band and X-band.

Russian officials and press reports have repeatedly claimed its air-defenses can detect and target many stealth aircraft, however some US observers believe Russia often exaggerates its military capabilities. Nonetheless, many US developers of weapons and stealth platforms take Russian-built air defenses very seriously. Many maintain the existence of these systems has greatly impact US weapons development strategy.

Accordingly, some analysts have made the point that there may be some potential targets which, due to the aforementioned superbly high-tech air defenses, platforms such as a B-2 stealth bomber, might be challenged to attack without detection.

However, Air Force leaders say the emerging new B-21 Raider stealth bomber advances stealth technology to yet another level - such that it will be able to hold any target at risk, anywhere in the world, at any time.