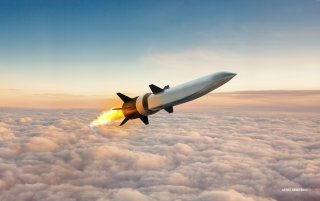 The successful firing of the Hypersonic Air-Breathing Weapons Concept (HAWC) represents what appears to be a breakthrough accomplishment in the Defense Department’s effort to fast-track, test, and ultimately deploy hypersonic weapons.

The effort has taken on urgency in recent years. U.S. weapons developers have noted that the United States has fallen behind Russia and China in the hypersonic arms race. However, with an accelerated effort and recent progress, the gap is closing quickly.

The HAWC is a weapons program that is being built under the partnership of the Defense Advanced Research Projects Agency and Air Force. It has industry support from both Raytheon and Northrop Grumman.

As cited by DARPA, air-breathing systems like HAWC use a scramjet engine to generate thrust—and propel the air vehicle across long distances to a target. This is quite challenging to accomplish because while it may be possible to quickly thrust or propel a weapon or air vehicle to hypersonic speeds, sustaining those speeds can be an entirely different matter.

While engineered to reach previously unattainable levels of propulsion, scramjet engine technology aligns with the technical configuration of existing high-power engine systems. This includes taking in a high-speed airflow, compressing the air and then igniting it with gas or some kind of propellant to generate thrust.

The DARPA, Air Force and multiple industry partners have been developing, testing and working on scramjet propulsion technology for many years. It has been a challenging and sometimes unsuccessful process. Several years ago, the Air Force experienced some success with its X-51 Waverider hypersonic scramjet—an effort that undoubtedly contributed to the success of the HAWC flight.

“The achievement builds on pioneering scramjet projects, including work on the X-30 National Aero-Space Plane as well as unmanned flights of NASA’s X-43 vehicles and the U.S. Air Force’s X-51 Waverider,” according to a DARPA press statement on the HAWC test.

The challenges with hypersonic flight are multifaceted. They include missile configuration, heat management, targeting and trajectory, and boundary layer air-flow surrounding the traveling weapon. Naturally, traveling at hypersonic speeds generates unprecedented temperatures, creating a need to engineer heat-resistant materials and creating the conditions needed to generate a smoother or “laminar” airflow less disruptive to a weapon’s flight path. Turbulence in the airflow can lead molecules and other particles to shift in flight, a phenomenon which can both generate excessive, destabilizing heat and throw the missile off-course, according to Air Force hypersonics weapons developers describe. This is why hypersonics weapons engineers take great care to specially build and carefully shape hypersonic vehicles, creating configurations more conducive to generating a less disruptive airflow. A less disruptive airflow, coupled with a smoothly-shaped horizontal exterior, might bring the added advantage of some “stealthy” properties as well. One senior Air Force scientist went so far as to describe the airflow challenges as “boundary layer phenomenology.”

Raytheon contends that “thermodynamics” or “heat” management as essential to creating successful and sustained hypersonic flight. The amount of heat generated by weapons traveling at hypersonic speeds can easily create flight instability or even destroy some of the materials built into the weapon. This is one reason why Raytheon developers specifically developed novel weapons materials intended to withstand high temperatures. One of the greatest challenges is what Raytheon refers to as the “effects chain”—the command and control, networking and sensor technology sufficient to achieve the requisite guidance, targeting and precision flight. This is an imperative aspect because maneuvering into targets, changing course as needed, and achieve precision strike capability are feats that are naturally more challenging when someone is attempting to achieve them at hypersonic speeds five times the speed of sound.