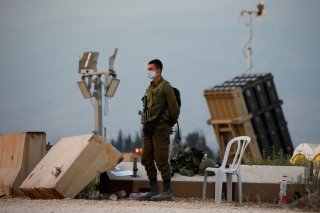 In a historic ceremony, the Israeli Ministry of Defense delivered the first of Israel’s famed Iron Dome batteries to the U.S. Army on Wednesday. The ceremony was conducted in northern Israel as the air-defense system developed by Israel’s Rafael Advanced Defense Systems was officially provided to the United States. The system will still need to be flown back to the United States or transported to another U.S. facility in the future.

Oshkosh trucks, designed to carry the Iron Dome system were flown from the United States to Israel in September on the giant Ukrainian Antonov plane. Israel’s Ministry of Defense said that the Israel Missile Defense Organization (IMDO), in the Directorate of Defense R&D (DDR&D), of the Israel Ministry of Defense, “delivered the first of two Iron Dome Defense System batteries to the U.S. Army. On this occasion, a symbolic event was held at the Iron Dome production line of defense contractor, Rafael Advanced Systems.”

Israel’s top brass and executives from Rafael were on hand for the event. Defense Minister Benny Gantz emphasized that the Iron Dome is part of Israel’s unique multi-layered air-defense system. It is the lower tier. The United States has supported Israel’s various air-defense missile systems such as Arrow and David’s Sling for many years. “The Iron Dome system . . . reflects the strength of the Israeli defense establishment. As a result of the effectiveness of this system, many deaths were prevented on the home front of southern Israel, and it has a significant impact on the battlefield. I am proud that this advanced system will also protect U.S. Army troops. This is an extraordinary achievement for both the Ministry of Defense and for Israel’s excellent defense industries,” Gantz said.

Gantz is the leader of Israel’s second-largest political party called Blue and White and a former Chief of Staff of the Israel Defense Forces. He went to the United States in late September to meet his counterpart, Mark Esper. Israel wants to make sure it maintains its qualitative military edge amid the new deal with the United Arab Emirates. Israel may want new airplanes and helicopters to maintain its capabilities. “Among other things, we discussed procurement and information sharing in the field of technology. The completion of this agreement serves as further proof that the defense alliance [between the United States and Israel], is based on common values and interests, which are stronger than ever,” Gantz said.

In addition to Gantz, the ceremony included the Minister of Economy, Amir Peretz, Head of the DDR&D, Dr. Dani Gold, Head of the IMDO, Moshe Patel Rafael Chairman, Uzi Landau, and Rafael CEO, Yoav Har-Even. The coronavirus pandemic and Israel’s lockdown appeared to have prevented a high-level U.S. delegation from attending. The Iron Dome battery was unveiled at the ceremony.

The Iron Dome battery has been of interest to the United States for years. It could help fulfill the needs of short-range air-defense, called SHORAD. It would have been helpful in Iraq against the constant attacks by pro-Iranian groups using 107-millimeter rockets. However, procurement processes are slow. Rafael partners with Raytheon in the United States on the Iron Dome system. “The first battery was delivered in record time, and the second battery will be delivered in the near future within the framework of the agreement. These batteries will be employed in the defense of US troops against a variety of ballistic and aerial threats,” Israel’s Ministry of Defense says.

The system has been credited with twenty-four hundred interceptions of enemy threats. Rafael Executive Vice President and Head of Rafael's Air and Missile Defense Division, Pini Yungman noted that the United States and Israel began this Iron Dome relationship with a series of tests and demonstrations in the ‘White Sands’ testing field in the United States. “To date, we have conducted three demonstrations and intercepted targets chosen by the U.S. Army for the Iron Dome system,” Yungman said.

The Iron Dome system and other aspects of Israel’s unique air-defense system are getting more attention in a world that has more drone and rocket threats and where conflicts and tension are growing from Asia to the Caucuses. Israel’s defense systems are regulated for export by strict guidelines and programs that are linked to U.S. support or joint efforts are particularly sensitive. Recently Czech Republic expressed interest in acquiring Rafael’s Spyder air defense, a system of missiles that is also a short-range air-defense system. Czech also acquired the Israel Aerospace Industries MMR radar that is made by Elta, a subsidiary of IAI. Together the unique radar, missiles and defense systems Israel has put in place makes the country uniquely capable of detecting and defending against missile, drone and other types of threats.