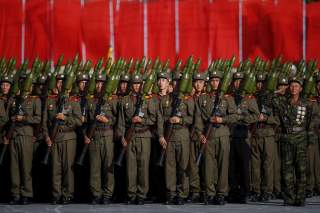 Let’s get this out of the way right now: North Korea has enough nuclear weapons to kill millions of people in minutes. And short of finding a way to convince Pyongyang to give those weapons up, that reality may not change for decades to come—if ever.

Yes, that is terrifying, but it is a reality.

And that’s not all. North Korean Chairman Kim Jong-un also holds a vast arsenal of chemical and biological weapons that could also kill hundreds of thousands of people, if not millions, at a moment’s notice, as well as thousands of artillery tubes that could start a 9/11-style crisis hundreds of times over in minutes. And just like Kim’s nuclear weapons arsenal, if we can’t come up with an incentive structure that Washington can accept politically and militarily—as well as a deal that Pyongyang finds appealing—none of this will change.

Yes, that is also terrifying, but it is also a reality.

Now is the time to face these realities head-on if—and most likely when—denuclearization proves to be impossible. We must accept these terrifying truths for what they are, and craft policies to mitigate the threat coming from North Korea, as opposed to continuing to play an increasingly dangerous game of foreign policy fantasyland.

None of this should be controversial, as nuclear weapons technology is decades old as well as the missiles that would carry such destruction across the globe. Just like we did when Russia, China, Pakistan, Israel and even allies like Britain, France and other nations built nuclear weapons, we adjusted our policies to consider such unpleasantries. Our failure to at least see the situation as it is—as horrible as it is—clearly is the single greatest challenge in our quest to reduce the threat posed by North Korea and protect critical allies.

Then there are domestic politics, which make facing reality a nearly thankless task. No U.S. politician wants to go down in history as the one who admitted America has failed to stop North Korea from building nuclear weapons, as the damage to one’s own reputation, political capital, and ammunition you would hand to your political enemies is obvious. Even though no one single administration, policy or person deserves such blame, the fallout—pardon the term—would be immense. And yet, every day that passes, we stick our head in the atomic sand, hoping for some sort of miracle, of some magic way we can convince Kim that our intentions are good, that we pose no harm to him, that he does not need any weapons of mass destruction to secure his regime from a future potential U.S. regime change operation. Yet, considering recent history—think Afghanistan, Iraq and Libya—that might be a hard sell indeed.

Of course, politics is only a small part of the problem. Our own national psychology that reinforces over and over our own need for primacy in all parts of the world and our “exceptional” nature surely means we should not have to accept a nuclear North Korea. That psychology declares that we can make Pyongyang bend to our will and that the Kim regime simply has no way to resist our demands. And yet, every intelligence report that breaks puts cracks in our own collective sense of invulnerability. Those reports that a nation as economically backward such as North Korea can kill millions of American’s rocks us to our core and challenges how Americans think of themselves. That might explain why so many of us here in Washington—including yours truly—reacted with such shock and anger over North Korea’s nuclear weapons and missile tests back in 2017. It was, and still is, our twenty-first-century “Sputnik” moment, a series of events that shattered our sense of security, our perceptions of how powerful our nation is mixed with the dreadful realization that a country with the human rights record such as North Korea has and will continue to build even more dangerous weapons of mass destruction. We want to believe that this is unacceptable, and yet the facts tell us otherwise.

All these seemingly separate but interconnected threads combine to create a witch’s brew of policy paralysis that will only damage our national interests. South Korea, for example, has faced the reality of the North’s nuclear weapons for over a decade, but it understands that it must engage economically with Pyongyang as well as diplomatically for a very simple reason: Seoul fears losing an opening of North Korea to China—ending any chance of potential unification for decades. For instance, Kim in his New Year’s Day speech proclaimed a “new way” that obviously means deeper cooperation with Beijing. Should this happen, it this would be a disaster for Seoul as well as Washington.

In the days in weeks ahead, it seems clear Team Trump—and indeed the entire world—will discover if there is anyway Washington and Pyongyang can find a mutually-agreeable formula to rid the world of the North’s nuclear weapons. If that is not possible, we should face that reality, accept it, and make it our policy to manage and reduce that threat. Pretending we can do otherwise would only serve to increase the threat from North Korea—and that would be a disaster.

Harry J. Kazianis is Director of Korea Studies at The Center for the National Interest. Follow him on Twitter: @Grecianformula.