America Must Not Underestimate Iran's Navy (Or Else) 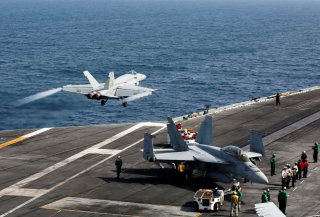 Key point: Just because Iran is woefully outmatched in pitched combat doesn’t mean that it can’t be used to challenge US power in other, more asymmetric ways.

As Washington and Tehran descend further down an escalatory spiral, the prospect of armed conflict with Iran is increasingly treated as an inevitability by its supporters. Meanwhile, detractors are urging the Trump administration to avoid what they see as an avertable military quagmire.

Media coverage of the ongoing Iran issue has largely focused on domestic and international ramifications, but what would a war with Iran actually look like? In particular, what are Iran’s military capabilities on the ground, in the air, and on the sea? The answer is more nuanced than it may appear. The National Interest previously looked at the state of the Iranian air force (IRIAF). We now turn to Iran’s surface navy.

A cursory overview of Iran’s surface vessel inventory suggests that the Iranian navy is in dire straits, and appearances are not wholly misleading. The situation has only worsened over the past several years; Iran’s modernized Damavand destroyer, laid down in 2013, sank in 2018 after colliding with the jetty of the Iranian Bandar Abbas harbor where she was stationed. Meanwhile, the two ancient Babr destroyers that Iran procured from the US Navy during the 1970’s were wisely taken out of action by the turn of the 21st century.

The frigate roster is only slightly more functional. Three Alvand-class frigates from the late 1960’s are nominally active, though likely far too degraded to be used in high-intensity conflicts, if at all. The Moudge-class frigates are much newer on paper, having been laid down in the 2010’s. In practice, they are little more than close derivatives of the roughly six-decade-old Alvand design. Coming in at a displacement of only 1,500 tons, the two active Moudge vessels are on the small and light end even for the typical frigate, let alone to qualify as destroyers, which is how Iranian state media insists on presenting them.

If there is any silver lining to found, it would in the form of Iran’s new Sahand-class frigate. Sahand seems to be a genuine step forward in Iranian vessel design, integrating the latest Iranian “Qader” anti-ship missiles, SM-1 surface-to-air missiles, and a relatively modernized onboard electronics suite. One advanced frigate, however, cannot compensate for what is otherwise an overwhelming Iranian deficit in surface military vessels.

Iran’s past naval scuffles with the US have gone exactly as one might expect. In Operation Nimble Archer, a US carrier and several destroyers faced little to no Iranian resistance in wiping out two defunt oil platforms that had been converted into military speedboat bases for the Revolutionary Guards. Iran’s surface navy was dealt an even more embarrassing blow during Operation Praying Mantis, when a US Naval strike force sank the Iranian destroyer Sahand (not to be confused with the 2018 frigate named in its honor) and inflicted a mortal wound on the Sabalan frigate later that day.

Whereas whispers of recent S-300 deliveries would provide the Iranian air force with at least some means of imposing costs on US fighter activity over Iranian airspace, there is little question that the Iranian surface navy lacks any serious military means to resist a US naval offensive.

However, just because it is woefully outmatched in pitched combat doesn’t mean that it can’t be used to challenge US power in other, more asymmetric ways. In particular, Iran’s heavy concentration of speedboats and minelayers could prove indispensable in a broader anti-access/area-denial (A2/AD) campaign to seal the Hormuz Strait or ambush US forces in the Persian Gulf. That, of course, comes with its own set of stark risks for Iran.