America Must Rally Europe and Asia Against Chinese Aggression 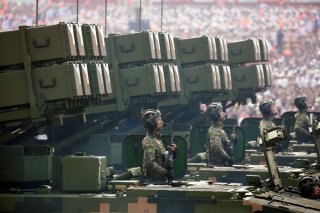 Chinese autocratic and mercantilist aggression are global in intent and impact, necessitating a reciprocal response. Politicians and pundits who present a binary choice between the U.S. commitments to the Indo-Pacific and the trans-Atlantic—including support of Ukraine and welcoming Finland and Sweden in NATO—misread the China challenge. A proportional and prudent response to Chinese (and Russian) revisionist designs calls for resolute alliances in the Northern Hemisphere across the Atlantic and Indo-Pacific oceans and mutually beneficial and respectful relations with the Global South.

NATO represents America’s most robust and dependable military alliance. In response to 9/11, NATO allied with the United States for 20 years in Afghanistan. At its recent summit, NATO assigned a strategic priority to address the threat of an aggressive China and hosted leaders of Australia, Japan, South Korea, and New Zealand. NATO and India have also held consultations. Confronted with the “no-limits” China-Russia partnership, there is stronger rationale and urgency for greater synergies between NATO and Indo-Pacific Quad nations.  The Indo-Pacific military preparedness is stronger for close coordination with NATO than without. A stronger NATO enables the United States to direct more forces to the Indo-Pacific, not fewer.

The strategic contest with China manifests most pressingly in the economic sphere. Chinese state capitalism and mercantilism imperil critical technologies and supply chains of free market economies. The leading free economies of Europe and Indo-Pacific are stronger together in reinforcing trusted rules-based economic arrangements. Europe is pursuing stronger trade with the Indo-Pacific. The U.S. efforts are amplified by greater coordination among Europe and Indo-Pacific free economies to counter Chinese market distortions and minimize the Chinese ability to play against the other.

Importantly, it is in the American interest to eliminate the free rider problem inherent in a regional approach to deter Chinese aggression. The United States is the indispensable security guarantor for both a free and open Europe and the Indo-Pacific. America disallows the China-Russia designs to expand their respective “spheres of influence” at the cost of the rules-based international order to the benefit of Europe and Indo-Pacific nations both independently and collectively. Nonetheless, most Indo-Pacific nations view the Russian invasion of Ukraine as a European and not a global concern. European nations may well reciprocate the sentiment if China invades Taiwan. Europe cannot be allowed to beseech the United States to repel Russia and hold itself to be a hapless victim caught between the United States and China. India and Asian nations may well heed their own advice to Europe that “Europe has to grow out of the mindset that Europe’s problems are the world’s problems, but the world’s problems are not Europe’s problems.” It is in the U.S. interest to rally Europe and the Indo-Pacific to a shared cause against China-Russia autocracy in eliminating the free rider problem.

The United States must integrate and reinforce its alliances in Europe and the Indo-Pacific to deter Chinese global aggression. The NATO and Indo-Pacific Quad military capability and preparedness are stronger for greater compatibility and synergies. The G7 would grow stronger as an economic counterweight to China by adding India and Australia to the predominantly European group. The United States, Europe, and Quad nations are stronger together in an augmented G10 to meet the economic aspirations of the Southern Hemisphere and reinforce the global benefits of rules-based international order.

The U.S. efforts to counter Chinese global aggression should deliver an impact greater not lesser than that of its parts. Rallying both Europe and the Indo-Pacific to the cause ensures it. Pitting them against each other for U.S. attention detracts from it. Enlightened self-interest calls for the United States to be the champion of a free and open world, not just a free and open Indo-Pacific. For one does not exist without the other. And with the United States leading the way, Europe and the Indo-Pacific need to contribute to that end in equal measure.

Dr. Kaush Arha is a senior fellow at the Atlantic Council and the Krach Institute for Tech Diplomacy at Purdue. During the previous administration, Dr. Arha was the architect of the Japan-U.S. Strategic Energy Partnership and Japan-U.S. Strategic Digital Economy Partnership as interagency bilateral coordinating forums, and an influential actor in the biannual U.S.-Japan Free and Open Indo-Pacific Dialogue.