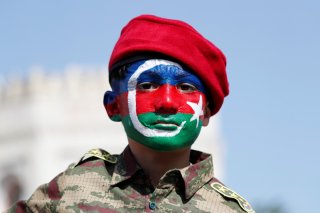 The ongoing dispute between Azerbaijan and Armenia should resonate with Americans as a case study of our country’s diminished power projection in an increasingly complex post-Cold War era. The Washington foreign policy establishment has vociferously condemned Turkey over the purchase of the Russian S-400 air defense system, gas disputes with Cyprus, and other geopolitical flashpoints. However, Turkey’s behavior in the South Caucasus has reached a pinnacle of brazenness even for a strongman like President Recep Tayyip Erdogan. He has thrown Turkey’s full weight of support behind a country that aggressively bombs Armenian settlements in Nagorno-Karabakh such as Stepanakert. America’s foreign policy elite has been relatively quiet in condemning Turkey’s most recent behavior. The lack of sanctions over Turkey’s great game in the South Caucasus contrasts with the American reaction last year when Turkey invaded northern Syria and displaced America’s Kurdish allies. What makes Armenia and Azerbaijan different?

Erdogan is on the same side of America’s key middle east ally, Israel, over Karabakh. This reality puts Washington policymakers in a difficult spot. Azerbaijan, Israel, and Turkey are aligned against Russia, Armenia’s most important ally, and Iran, Armenia’s only bordering trade partner besides Georgia. The dirty secret is that principled condemnation of Turkey and Erdogan’s illiberalism will only go so far in Washington’s corridors of power as foreign policy elites remain hyper-focused on competition with Russia, China, and Iran. For example, Michael Doran, a senior fellow of the Hudson Institute, tweeted out, “Russia, Iran, & Armenia versus the US, Turkey, and Azerbaijan. This is the alliance structure in the Caspian region,” while further praising Erdogan for helping Israel by weakening Iran. As one of the few non-Armenians to visit Karabakh, I was wonderfully treated by the residents with warm hospitality. From my perspective, posturing for a state that is terrorizing civilians with drones and ballistic missiles is unfathomable. I share the view of most Americans who are exhausted from decades of militarized foreign policy and failed geopolitical chess moves in the Middle East. We must challenge Washington’s implicitly pro-Turkish line which stems from a mindset that has justified endless war in Iraq, Syria, Afghanistan, and beyond. Instead, we should welcome Russian peacemaking as we seek to decrease our overseas military commitments and contain Erdogan’s aggression.

An analysis of Turkey’s conduct in the ongoing Karabakh conflict is necessary to understand the depth of Erdogan’s cynicism and brutal power politics. Turkey’s use of mercenaries in Karabakh is a noteworthy chapter in the Turkish dictator’s neo-Ottoman expansionism. The Turkish military has flown over 1,500 Syrian mercenaries to the frontlines of Nagorno-Karabakh to assist Azerbaijan in taking back the disputed territory. These mercenaries were from the same Sunni jihadist forces fighting against Russia and its allies in Libya and Idlib, Syria. Liz Cookman of Foreign Policy conveys the contempt shrouded in this proxy warfare. Young Syrian men, given roughly a month of training and $1,500 per month, were thrown into the heat of battle with little value for their personal safety. These young men were also lied to. The Turks led them to believe their responsibilities would be relegated to reserve tasks. One fighter in the Barda district of Azerbaijan reports that the Syrians receive little communication or support from the official Azerbaijani military in the fray. This strategic negligence has resulted in the deaths of over fifty-five Syrians, whose bodies have returned to mournful families in Syria, adding another cruel twist of fate to a country mired in human suffering. Indeed, this suffering is no small part due to Turkey carving out a sphere of influence in northern Syria around Idlib with the help of forces such as former Al-Qaeda affiliate Hayat Tahrir Al Sham, which uses the Turkish lira in areas of its war-torn jurisdiction. In short, Turkey is exploiting the instability it has fueled in the near-decade-long Syrian Civil War to fuel further instability and destruction in Karabakh.

If the use of Middle East proxies in shady arrangements for geopolitical power projection sounds familiar, it should. One of the greatest criticisms of Iran among U.S. foreign policy experts is Tehran’s organization of proxy forces from Yemen to Syria. This condemnation has merit. The young Shia Afghans of the Fatemiyoun brigades shared the same end as many of the Turkish-backed Syrian National Army (SNA) soldiers in Karabakh.

In a New York Times report, veterans of the Fatemiyoun detailed the gruesome nature of their mission assignments, claiming only thirty would survive out of 300 in one battle. The report details how Fatemiyoun fighters come from marginalized backgrounds, much like SNA soldiers. Their tenuous status as Afghan refugees leaves war as the alternative to poverty wages or deportation. According to the Middle East Institute, the Fatemiyoun’s Iranian commanders see their fighters’ lives as cheap, thrusting untrained militias into high-casualty battles. This behavior is rightfully condemned when Iran is fortifying its “Shia crescent” of power across the Middle East. It should also be condemned when Erdogan is assisting Azerbaijan in the potential ethnic cleansing of Armenians from their historic homeland.

One of the most frightening aspects of the Karabakh conflict is Baku’s use of Israeli and Turkish drone and missile technology against Armenians in Karabakh. Civilians living in the mountainous region have to live in fear with the sound of deathly buzzing over their heads as Israeli-made Harop drones fly into their targets and detonate kamikaze-style. Armenian civilians in the town of Martakert have heard this signature deadly weapon of the Azeri arsenal. On October 2, footage surfaced of an Israeli-made LORA ballistic missile destroying a bridge between Armenia and Karabakh. A cutting-edge weapon with striking accuracy of 33 feet, this destruction of civilian infrastructure was the first use of the LORA missile in combat. Unlike Turkey’s silence on mercenaries, Azerbaijan has openly bragged about its high tech advantage, ghoulishly beaming videos of its drone strikes onto public advertising boards in Baku.

Azerbaijan justifies its acts of military belligerence toward Armenia on the grounds that Nagorno-Karabakh is occupied Azeri territory. Defenders of Azerbaijan often describe Karabakh as some sort of neocolonialist settler project at the behest of Armenians. This slander cannot be further from the truth. Having been to Karabakh, I had the privilege to walk the sacred grounds of the Gandzasar monastery which has stood perched in mountainous peaks since the 1200s. The rich literary tradition of Armenia speaks of Karabakh as a jewel of their indigenous homeland.

Of course, the historical boundaries of the Armenian nation cannot be discussed without addressing the injustices of the Armenian genocide. From 1915 to 1923, the millennia-long Armenian presence in eastern Turkey was completely extinguished. 1.5 million Armenians perished in Ottoman torture, massacres, forced labor, and deportations. Symbols of Armenian history and culture such as the city of Van were wiped off the face of the earth. With this painful historical memory, the Armenian people are dedicated to ensuring they do not lose any more of their historical territory in a somber echo of 1915.

Furthermore, ethnic Armenians have always constituted a demographic majority of the Karabakh region. When Armenia was part of the Soviet Union, Karabakh was transferred to the Azeri Soviet Socialist Republic’s administration by Joseph Stalin in 1921. When Nagorno-Karabakh’s Soviet parliament petitioned for secession from Azerbaijan as the Soviet Union was falling apart, the Azerbaijani Soviet Socialist Republic responded by massacring and expelling ethnic Armenians in various pogroms from 1988 to 1990. War began on September 2, 1991, when Nagorno-Karabakh declared independence from the Soviet Union. The subsequent fighting razed the region to the ground with roughly 30,000 deaths and 1 million people displaced. To be fair, ethnic displacement was not one-sided. Azeris living in Karabakh fled the region and surrounding territories which were subsequently annexed by Armenian forces in the midst of the chaos. However, that does not change the fact that Armenians have had an enduring presence in Karabakh.

Today, those Armenians face an existential choice over what life their children will lead as they hide in bomb shelters. When President Ilham Aliyev demands that Armenia cease its occupation of Karabakh, he is not merely demanding that Armenian military forces leave the region. Could we seriously believe that a regime that regularly de-humanizes Armenians would tolerate their civilian presence in Karabakh upon military withdrawal? Azerbaijan is undertaking an ongoing campaign of destruction against all Armenian cultural artifacts in its jurisdiction, reminiscent of the Islamic State’s archeological pillage as Turkish journalist Uzay Bulut points out. In Azerbaijan, eighty-nine Armenian churches, 5,480 cross-stones, and 22,700 tombstones have been destroyed according to researchers Simon Maghakyan and Sarah Pickman. Under Azeri occupation, I shudder to think what would happen to the Gandzasar monastery.

In an unforgettable experience in 2018, I met wonderful, peace-loving families in Karabakh with young children. Knowing Azerbaijan’s past, I recognize that any call to “end Armenia’s occupation” means that such families have no place in a region they have called home for generations. Having reached this unsettling conclusion, the people of Armenia firmly believe they are in a fight for their very existence. It is this mindset that leads Armenian President Nikol Pashinyan to declare that Turkey and Azerbaijan hope to complete the Armenian genocide. The Armenian people have been on the losing end of history for centuries, falling to the machinations of far stronger outside powers. As a tiny nation, all Armenians hope for is a peaceful future with their neighbors. They hope to continue having the freedom to practice their unique form of Christianity and folk culture in their indigenous lands. For Erdogan and Aliev’s authoritarian regimes, the Armenian people are asking for far too much in this small corner of the world.