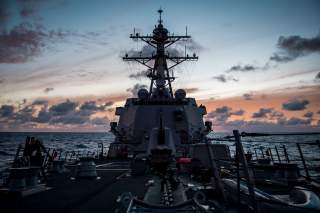 Twenty-five nations, fifty-two naval vessels, and more than two hundred aircraft and 25,000 personnel participated in the biennial Rim of the Pacific exercise (RIMPAC). From June 27 to August 2, nations from across the globe, including first-time participants Israel, Vietnam, and Sri Lanka, worked together to be “Capable, Adaptive, Partners.” It is the world’s largest international maritime exercise, and it is coming to a close. By the number of participants, RIMPAC is the second largest military exercise in 2018 only behind the North Atlantic Treaty Organization’s (NATO) Exercise Trident Juncture. This strong multilateral participation marks just how robust American maritime alliances are around the globe.

Yet there was one notable absence from RIMPAC. In late May, Pentagon spokesman Marine Lt. Col. Christopher Logan announced: “As an initial response to China’s continued militarization of the South China Sea we have disinvited the PLA Navy from the 2018 Rim of the Pacific (RIMPAC) Exercise.” Even though China was disinvited from the exercises, Beijing sent a Type 815 AGI surveillance vessel to survey the proceedings as they have in the 2014 and 2016 exercises.

While the twenty-five participants demonstrate substantial multilateral cooperation, there is an overarching American leitmotif on RIMPAC. The exercises are held off the coast of Hawaii and California, and the United States contributes nearly half of the ships to the mission. The symbolic message of RIMPAC is clear—that collective security under United States leadership is the best way to ensure a “free and open Indo-Pacific.”

To overcome this stalemate, a decision has to be made. According to Professor Hal Brands of John Hopkins University, the current options in the South China Sea are rollback, containment, offset, or accommodation. Rollback would regain the territory, but within recent years China has gained a military advantage in the South China Sea. This option also presents the greater risk of further escalation with China. There may be some appetite for the rollback option in Washington as it is believed that National Security Adviser John Bolton would risk military conflict with China in order to dismantle China’s military bases in the region.

However, Bolton’s view appears to be a minority in the White House as Washington has thus far only named and shamed China in addition to conducting Freedom of Navigation Operations (FONOP) missions. These policies are meant to be a form of soft-containment but are proving to be ineffective as they do nothing to change the reality in the region—that China is continuing to change the regional status quo to its will. If Washington continues its current policy of soft-containment, then the result will be an authoritarian-state dominated the South China Sea.

Furthermore, recent months have seen a change in policy from Washington. Secretary of Defense Jim Mattis stated in the Shangri La Dialogue that the Indo-Pacific “is our priority theatre, our interests and the region are inextricably intertwined.” In addition, White House press secretary Sarah Huckabee Sanders stated that “there will be near-term and long-term consequences” for China’s militarization of the South China Sea. The “near-term consequence” was China being disinvited from RIMPAC, but it is yet to be determined what these “long-term consequences” will be.

RIMPAC demonstrated just how powerful collective security could be with the United States as the leader. However, as policymakers in Washington have debated over the best course of action in the South China Sea, policymakers in Beijing are pleased to have changed the status quo. The current policy of soft-containment has proven to be ineffective.

Time is working against the Trump administration. Every day Washington fails to have a coherent policy is a day that China increases its influence in the region. If the goal is to maintain a ‘free and open Indo-Pacific,” then the strategy in the region has to change, and it has to change immediately.

James Amedeo is a researcher at the Asia Studies Centre at the Henry Jackson Society.