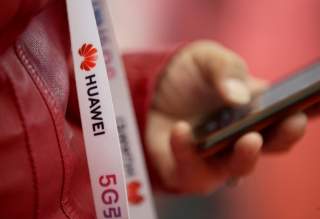 At the recent NATO Leaders Summit in London, President Trump was clear about how he and the United States government view Chinese Communist Party (CCP) linked telecommunications equipment manufacturers like Huawei and ZTE, when he said, “I do think it’s a security risk, a security danger.” But here is the challenge for the President and his Administration: even our closest allies, few of whom question the threat, are understandably focused on the next question--if not CCP-linked telecommunications equipment, whose?

Since taking office, the Trump Administration has changed the rules of the game when it comes to confronting the CCP and its state- and privately-owned enterprises (which are also at the beck-and-call of the Party thanks to the 2017 National Security Law of the People’s Republic of China).

First, he issued a sweeping Executive Order on Securing Information and Communications Technology and Services, which prohibits the federal government from using telecommunications equipment from other than trusted vendors--Huawei and ZTE, while not mentioned, would, of course, not qualify. This executive order complemented section 889 of the National Defense Authorization Act of Fiscal Year 2019, which prohibited outright Huawei and ZTE, but also CCP-linked video surveillance equipment, which is involved in such atrocities as the ongoing suppression of the Chinese Uighur minority.

Second, this past May, the President ordered Secretary of Commerce Wilbur Ross to place Huawei on the department’s “entity list”, which prohibits U.S. firms from selling almost anything to that company. As that broad action has been implemented, it’s been clear the Trump Administration is targeting most harshly those technologies Huawei most needs to roll-out its own 5G capability.

And the independent Federal Communications Commission, under the leadership of Chairman Pai (who was appointed by President Trump), has been modernizing the regulatory framework to promote the 5G implementation in the United States.

Despite all of these actions and an unprecedented level of focus at the highest level of our government (the President himself in many cases), there are grave risks in the months ahead.

While several allies, for example, Australia and Japan, have taken steps to effectively bar Huawei from their 5G systems, several other of our closest allies may soon make a decision that will set back global security, regional security, and, perhaps most alarming, bilateral security arrangements with the United States.

Take, for example, America’s closest ally: the United Kingdom.  If there is a positive side effect from the recent general election in that country, it’s this: when a general election has been called, by law, the incumbent government cannot make a major policy decision.

There is likely no more “major policy decision” than whether or not to allow Huawei into the U.K.’s 5G infrastructure – effectively, into the heart of the world’s most successful intelligence sharing alliances, "the five eyes."  And, with any luck, the Shakespearean tragedy that is Brexit may allow several more months of margin to put off further what could be the largest rupture in the “Special Relationship” since Dolley Madison was forced to rip George Washington’s picture from the walls of the White House.

Why would a country like the U.K. risk such a schism with its closest ally, especially at a moment of its closest need (i.e., during Brexit)?  Simply put, a very rational fear that if it doesn’t, it will fall behind in the race to deploy 5G and the promised economic gains it will generate.

But why is that the choice?  Simply put, it is not enough for the United States to explain the risks of using CCP-linked technology, like Huawei’s or ZTE’s.  Those risks are largely beyond dispute.  Even the European Union, whose requirements for consensus typical preclude bold positions, went so far as to warn member states of the risks posed by companies who are subject to the kind of national security law that China adopted in 2017.

What’s needed is for the United States to offer allies and partners a clear alternative to Huawei (and ZTE) on 5G.  Because of artificial subsidies in the Chinese market, and export incentives for the international market, Huawei offers a complete 5G capability to countries and their telecommunications providers at prices no actual private company can meet.  Thanks to the Chinese Communist Party, in other words, there is no longer a free market when it comes to the most-advanced telecommunications equipment.

But the Administration has been fighting back (as noted above).  Altogether, the actions taken by the Trump Administration have created what amounts to a sanctuary – but only a temporary one – into which the U.S. government can incentivize private companies, like Samsung, Cisco, Ericson and Nokia, to compete on a more level playing field.  Even now, the CCP is directing its companies to find ways to change their supply chains to reduce their reliance on the United States and other markets.

The United States government has long been comfortable setting industrial policy when it comes to national defense.  Indeed, we have the Internet today because of the Defense Department's directed innovation.  What’s needed now is a similar approach for both the domestic market and those of its allies.

Imagine the combined market and technological potential of the United States, the United Kingdom, Germany, Poland, Japan, Australia, South Korea and Taiwan.  Even the People’s Republic of China would find it challenging to distort the market and defeat trusted vendor 5G solutions put forward by such a combination of allies.

If the Trump Administration builds on its progress to date, we can give allies like the United Kingdom a genuine alternative that doesn't cost them their competitive edge.  I’ll be the first to buy Prime Minister Johnson a new phone—I’ll throw in a new hairbrush.