America Needs to Rethink How It Is Handling China’s Rise 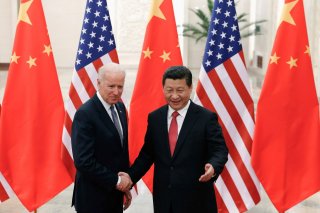 China’s rise into a major world power has been nothing short of extraordinary. Since adopting liberal economic reforms in the early seventies, China’s economy has grown approximately ten percent per year, its life expectancy has gone up by 50 percent, and nearly all wargames now predict that Beijing would win if conflict broke out in Asia.

China’s rise was expected. America not only supported it but was also a key participant. America supplied a stable reserve currency, invested large amounts of capital in its economy, and provided Beijing with its largest export market, all of which were crucial for China’s rapid transformation.

This arrangement was never one-sided, however, as America benefitted too; one piece of analysis, for example, argues that approximately 2.6 million American jobs are supported by Chinese-American trade.

Yet, while the economies of both countries benefited, China’s rapid growth created the dilemma known as the Thucydides Trap, which is “the severe structural stress caused when a rising power threatens to upend a ruling one.” This tension has historically laid the groundwork for a minor incident to result in a major war, such as the assassination of archduke Franz Ferdinand leading to World War I.

America was always aware of this dilemma, and in response employed a strategy of “Congagement,” which was a mixture of military containment and economic engagement. The assumption was that China would not seek to overturn the current order if it was allowed to become a responsible stakeholder of the current one.

At the time this seemed like a good policy. China was invited to join an order that was described as rule-bound and highly cooperative, which was “hard to overturn and easy to join.” As others have noted elsewhere, it was arguably China that benefited the most from this order, as it allowed it to raise eight hundred million of its citizens from poverty while also keeping Japan, a historical rival, militarily weak and unthreatening.

But after thirty-plus years of bipartisan support, it is now widely acknowledged that this strategy has failed, as Beijing not only rejected the invitation to fully integrate but is currently pursuing an alternative order. Included are economic institutions that rival those of the Bretton Woods System, such as the Belt and Road Initiative, the Asian Infrastructure Investment Bank, and the New Development Bank. Also included is a new security order where China replaces America as the region’s dominant military power.

America’s response has been to blame China, arguing that an illiberal regime would have never fully bought into a liberal system, no matter how much it may have benefited from it in the past. The new American consensus now argues for a more combative stance towards China’s rise, which includes decoupling their economies, strengthening America’s regional deterrence, and shoring up American allies.

While this approach may prove popular at home, it is a poor strategy, because it misreads why congagement failed. From the perspective of China, America was never some benign custodian of a rule-based order but instead a belligerent hegemon, breaking international law to spread its liberal values abroad. Given the imperial nature of this order and America’s reluctance to change it, Chinese ambitions for its own were largely inevitable.

For example, accommodation has long been a Chinese complaint. By some metrics, China is already the world’s largest economy yet its influence in the World Bank and the International Monetary Fund has typically lagged. This disproportionate power offers America the opportunity to impose its own political values onto others. The most common example of this being conditionality lending, where recipients must also agree to political reforms if they wish to qualify for aid. These reforms very often include human rights provisions. China has long objected to such practices and its creation of alternative economic institutions is a response to America’s reluctance to address them. If America’s objective is Chinese integration into the existing world order, then it should offer a variety of incentives to integrate. This can not only mean economic growth but also institutional power.

Also motivating Chinese revisionism is the American hypocrisy regarding the use of force. The liberal world order is alleged to have norms and institutions discouraging conflict, where no one could extend its influence using the force of its military. America, however, was exceptional, which allowed it to violate these prohibitions whenever it determined there were good reasons to do so.

America needs to rethink how it is handling China’s rise. Its past strategy has clearly failed considering China is not only pursuing a new regional order but one that does not have a role for America. But instead of a strategy of confrontation, America’s new approach should be centered around accommodation and restraint.

This would mean ensuring international institutions reflect the current distribution of world power. The Bretton Woods Institutions are not mere instruments of the United States, but America’s outsized influence in these institutions offers it unique opportunities to reform foreign politics in liberal ways. It was the American reluctance to share power over these organizations that incentivized China to create alternative ones.

America should also get serious about respecting the international law prohibiting the use of force. China has rebuilt its military in large part because it does not trust America to practice self-restraint. Considering how often America has used its military over the last three decades, China would be foolish not to. If America wants to be the leader of a world governed by rules and not power, then it should lead by example, and only use its military when it abides by the same rules it expects others to follow. This would mean that if America uses force, it must have a United Nations mandate or be acting in self-defense.

To acknowledge American abuses does not absolve China, however. America demonstrated a great deal of tolerance for China’s long history of illiberal economic policies and despite Beijing’s stringent defense of state sovereignty, it has meddled in the politics of foreign countries from time to time. But the point is for America to develop a new strategy by viewing its own behavior through the eyes of its competitor. From Beijing’s perspective, the liberal world order was merely a vehicle for America to impose its own values on the rest of the world. Considering China has never shared those values, and probably never will, it should not be surprising that it had little interest in becoming a supporting member. America should therefore work with China to reform the current order, appreciating that a new power distribution exists as well as an awareness of how America’s own illiberal behavior contributed to the previous order’s breakdown.