America Is The Only Country Keeping China From Seizing Taiwan 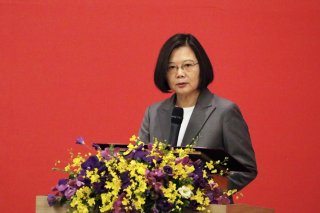 Much was at stake during US Health Secretary Alex Azar’s Taiwan visit on 10 August. During the first cabinet-level visit by the United States since 2014, Azar praised Taiwan’s success in dealing with the COVID-19 pandemic and raised the possibility of a US–Taiwan bilateral trade arrangement. Meanwhile, Chinese fighter jets screeched over the median line of the Taiwan Strait. Shortly after Azar’s departure, the Chinese People’s Liberation Army (PLA) announced drills to warn ‘Taiwan secessionists and the forces behind them’.

While China and the United States are eager to flex their muscles over Taiwan, Taiwan’s security seems increasingly at risk. Taiwan’s real threat, however, is not in invasion but China’s mixture of sabre-rattling and integration-luring.

Threats of ‘unification by force’ have not stopped since Taiwan President Tsai Ing-wen took office in 2016. In response to the growing US military presence around the South China Sea and the Taiwan Strait, the PLA increased its publicising of standard military operations. Taiwan’s Ministry of National Defence has also accused China of spreading fake news about regional military activities to muddy the waters.

To deter the United States from getting involved in a possible conflict in the region, the PLA is enhancing its Anti-Access/Area Denial system. When China fired four ‘aircraft-carrier killer’ missiles into the South China Sea on 26 August, it was a reminder that the PLA holds a considerable deterrent.

However, given the US refusal to end arms sales to Taiwan and Taiwan’s dwindling support for unification, China has not yet grabbed Taiwan via sheer military force. A swift seizure, minimising foreign intervention, requires skilled joint operations which the PLA is still developing.

War would also be ‘too costly’, warned retired PLA general Qiao Liang. Consequent Sanctions would hurt China’s economic development and Beijing’s efforts to ease US–China tensions would evaporate if the United States were forced to react strongly to a cross-Strait conflict. To prevent tensions from escalating, the PLA is under orders ‘not to fire the first shot’.

Beijing’s openness on social and economic relations with Taiwan is a result of rational calculation. In the short term, China needs Taiwan’s high-tech industry to support technological innovation and weather the escalating US–China tech war. During the first half of 2020, Taiwan’s exports to China soared to 42.3 per cent of its total exports as the US chip ban forced China to look to Taiwan for key components.

Beijing is refining its ‘soft-hand’ strategy, promoting what Chinese authorities call ‘hearts and souls in sync’ (xin ling qi he). Trade remains one of the few areas where a majority of Taiwanese feel positively about China, with 52 per cent wanting closer economic ties with the mainland. Severing cross-Strait economic relations would inflict pain on Taiwan, but it would also lead to further deterioration in public opinion on China.

In practice, integrating economically is still politically fraught. During Taiwan’s previous Ma administration, efforts stalled when the 2014 Sunflower Student Movement broke out in response to the Cross-Strait Service Trade Agreement.

Though a conventional war may not be imminent, there are still unresolved vulnerabilities in Taiwan’s security. A recent debate on whether a PLA invasion could be curbed demonstrates how Taiwan’s partisan division extends to defence strategy disagreement. Efforts to boost Taiwan’s asymmetric military capabilities will stall if China successfully erodes Taiwan’s morale through soft strategies.

Another liability lies in the shifting economic contours. By allowing US meat imports into Taiwan, Tsai is pushing for a bilateral trade agreement with the United States. How quickly the negotiations will proceed, how comprehensive the agreement will be and how China will react all remain unknown. But ultimately the prospect of a US–Taiwan trade agreement could be ‘much thunder, little rain’.

Without substantial bilateral trade agreements or regional free trade partnerships like the Comprehensive and Progressive Agreement for Trans-Pacific Partnership, Taiwan’s international competitiveness on trade will likely decrease. Taiwan’s technological edge on China — another reason why China is circumspect about hard strategies — may not last. In the hope of reducing its reliance on Taiwan, China is investing heavily in high-tech industries. Protecting Taiwanese tech while maintaining economic ties with China is a delicate balancing act.

The sound of fighter jets screaming amid sweet talk about integration is terrifying, confusing and luring for Taiwan. Aside from the headline-stealing military operations, there remains much to be done to prevent China from gradually sipping up Taiwan’s autonomy.

Nicholas Chiu is a political and cross-strait affairs researcher based in Taipei.