Is America Overestimating The China Challenge? 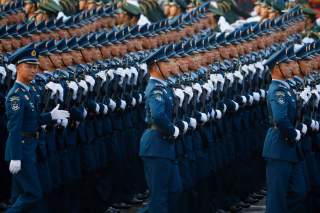 For many avid watchers of last year’s Chernobyl, which recently won a 2020 Golden Globe award for best television miniseries, some of the most harrowing moments probably had nothing to do with the nuclear reactor meltdown. Instead, the big shocker was seeing just how poorly middle-class Soviets lived in the 1980s, especially those faithfully-recreated dingy and rotting apartments. More than a few millennial viewers probably wondered how their parents and grandparents could have been so worried about a geopolitical challenge from such an economically backward nation. The so-called superpower clearly looked ready to collapse.

But things weren’t quite so clear to late Cold War policymakers. Few realized just how shaky the Soviet Empire was. Back in 1990, The New York Times reported on a conference sponsored by AEI where a Soviet lawmaker claimed Soviet living standards were ”significantly worse than it seems to our American colleagues” at the CIA. (The intelligence agency offered a different view of its performance.) And among those who fully realized the USSR was an economic backwater and getting worse, hardly any experts in the 1980s thought it would disappear anytime soon. As AEI scholar Leon Aron wrote back in 2011, “In the years leading up to 1991, virtually no Western expert, scholar, official, or politician foresaw the impending collapse of the Soviet Union, and with it one-party dictatorship, the state-owned economy, and the Kremlin’s control over its domestic and Eastern European empires.”

Nor were there many experts during the Reagan era who saw powerhouse Japan heading toward prolonged recession and stagnation of the Lost Decades. Just the opposite. Plenty of American policymakers thought Tokyo has discovered a new path toward prosperity. Japan’s economy was praised back in the 1980s by many “Atari Democrats” as demonstrating the superiority of smart technocratic planning vs. more market-based policy built around keeping taxes low and regulation light.

Now as it happens, 21st century China has been described as a combo of 1980s Japan and Soviet Russia in that it poses a comprehensive economic, military, and ideological challenge to American global dominance. Yet is America again overstating the strength of a geopolitical challenger? Certainly some here are impressed by that nation’s rise from deep poverty and its long run of fast economic growth. And they wonder whether Washington should do its own version of Chinese state capitalism with its own form of state-directed industrial policy. Chinese state capitalism with American characteristics. In my recent The Week column, I offer context:

Chinese state capitalism isn’t working so well anymore. The Economist recently notes, “There is evidence that China’s heavy-handed intervention is becoming increasingly ineffective. Total factor productivity growth in China in recent years has been a third of what it was before the 2008 global financial crisis.”The Harvard Business Review concludes that “absent a major pivot in thinking and approach, [Chinese firms] will be unable to deliver the productivity gains needed to offset the consequences of the steepening decline in the country’s working-age population.” And Reuters recently reported, “Chinese productivity growth has gone into reverse for the first time since the Cultural Revolution tore the country apart in the 1970s … highlighting the failure of recent reforms to set China on a sustainable development path.”