America Should Not Embolden Israel’s Enemies 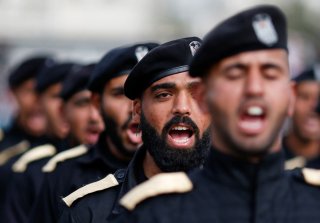 For decades, U.S. policymakers have aspired for an Israeli-Palestinian two-state solution. The logic underpinning this approach is thus: Because the Palestinians desire self-determination in the form of statehood, and because Israel’s military and civilian presence in the West Bank supposedly makes that impossible and provokes violence (frequently in the form of terrorism), Washington should encourage Jerusalem to concede territory to a future Palestinian state. By mollifying Palestinian frustration, violence will lessen, and the conflict might even end, thus serving U.S. interests such as in increased regional stability, security for Israel, and a fair outcome for the Palestinian people.

The opposite, however, is true: America’s interests are not served by the current “peace process.” It is time for policymakers of both parties to acknowledge this.

The reason is that Hamas, the U.S.-designated terrorist organization that controls the Gaza Strip, is a powerful—if not the most powerful—force in Palestinian politics. The group’s founding charter spells out its goals clearly: “Israel will exist and will continue to exist until Islam will obliterate it, just as it obliterated others before it.” Hamas’ members and allies are responsible for countless suicide bombings, stabbings, shootings, car-ramming attacks, and rocket barrages targeting Israeli civilians. After Israel evacuated the Gaza Strip in 2005, Hamas took control of the territory in 2007 following a bloody civil war against Fatah party rivals in the Palestinian Authority (PA), which rules over the majority of West Bank Palestinians today. Since 2007, Hamas has fought four wars with the Israel Defense Forces (IDF).

U.S. policymakers have no choice but to assume that this process would repeat itself following an Israeli withdrawal from all or most of the West Bank. Indeed, the Israel Security Agency (Shin Bet)  continues to break up Hamas cells in the territory. Suicide vest-donning terrorists in the West Bank city of Jenin recently railed against the “Zionist enemy” during a ceremony. If Hamas controlled the Judaean Hills of the West Bank, the group would obtain a perfect vantage point to launch rockets at civilians in Tel Aviv. Subsequent Israeli military operations to defend its citizens (while sadly necessary in such an unwelcome scenario) would undoubtedly inflict unintended civilian casualties and also devastate the Palestinian economy in the West Bank. The threat this presents to Israeli security and Palestinian prosperity is obvious, but an empowered Hamas would also directly threaten America’s national security by invigorating many of the United States’ sworn enemies.

Islamist terror groups around the world revel in each other’s successes and lament each other’s losses. That’s why Hamas’ Ismael Haniyeh forlornly denounced America’s “killing of a Muslim mujahid” after the 2011 Osama bin Laden assassination, and the group excitedly boasted a decade later that the Taliban’s “expulsion of the American occupation” is a harbinger that “the resistance of the [occupied] peoples – first and foremost our fighting Palestinian people – will end in victory and in the actualization of its goals…”

Granting terrorists victories only serves to boost their morale and extend the overarching conflict. Scholars Bruce Hoffman and Jacob Ware have argued that American withdrawals in the face of attacks—from Beirut in 1983 to Somalia in 1993 to Iraq in 2011—have only encouraged further violence.  Similarly, the Israeli withdrawal from southern Lebanon in 2000 bolstered Hezbollah and led to a destructive war against Israel just six years later.  Validating Hoffman and Ware’s point further, Israeli evacuations from the West Bank in the 1990s and the Gaza Strip in 2005 preceded the Second Intifada, an insurgency fraught with suicide bombings, and rocket barrages, respectively.

Should a Hamas victory materialize in the West Bank, Islamist terror organizations around the world would bask in the perceived success of the struggle. For example, Lashkar-e-Taiba, the group behind the massive 2008 terror attack in Mumbai which has branded Israel, India, and the United States “existential enemies of Islam,” might expand its operational range and its frequency of attacks if galvanized. Further, Iranian-backed militias that regularly attack American troops in Iraq and Syria would likely increase their assaults if emboldened by Hamas’ advances. The Iranian-backed Houthis in Yemen, too, whose motto is “Death to America, Death to Israel, Curse the Jews, Victory to Islam!” might increase their rocket and drone assaults on U.S. ally Saudi Arabia, risking further destabilization in an already fraught conflict.

The timing could not be worse to energize the enemies of Israel and the West in the Middle East and beyond. As the United States boosts its efforts to counter a rising China, intensified Middle East conflict is an unhelpful complication for U.S. strategy.

None of this is to argue that the United States should be obstructionist or play spoiler in the Middle East. If Israel and the PA should decide to resume negotiations towards a two-state outcome (an unlikely prospect given Fatah’s own tendency to glorify and financially reward terrorism against Israelis), that is their right. But it doesn’t mean that the United States must burden itself in a diplomatic quagmire that poses substantial risks to its national security interests.

So, what should the United States do? Simply put, it should make every effort to strengthen its reliable Middle Eastern allies (especially Israel) and deter their enemies. This means continuing to support Israel in its unflinching defense against Hamas in Gaza and the West Bank to the extent necessary to keep the terror group at bay, providing Israel with as much weaponry as necessary to adequately deter—and, if war breaks out, to swiftly defeat—Iranian military and proxy forces, and encouraging more normalization agreements among Israel and its neighbors, particularly Saudi Arabia.

The Palestinian people deserve a state no less than any other national group. By that same logic, so do the Jewish people. But if there is to be any hope of ending the conflict, Hamas will need to renounce terrorism, accept Israel’s existence, and acquiesce to a permanent two-state outcome. Unfortunately, this hope is unrealistic. U.S. policymakers must recognize this reality and eschew diplomatic efforts that invigorate not only Israel’s enemies, but America’s, as well.

Zac Schildcrout is a master’s student at the Johns Hopkins School of Advanced International Studies (SAIS).