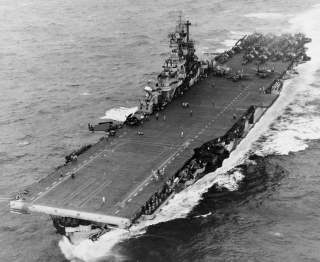 PLA defenders have reason to take heart. It’s not easy to command the sky near a coastal state’s shores, as U.S. naval aviators must in order to prevail in Western Pacific conflicts. Navy flight instructors—the best of the best, as the old Hollywood cliché has it—concede they now confront a “fair fight” in maritime Asia on a plane-for-plane basis. This panel from the most recent Tailhook Association Symposium, which brought together eight instructors to debate whether the U.S. military is ready for great-power strategic competition, makes for sobering viewing. (Spoiler alert: to an officer they answered No.) So if American warplanes are evenly matched against their PLA competitors and the fight takes place on PLA home ground—pitting a fraction of U.S. naval air power against the whole of Chinese air power, both PLA Navy and PLA Air Force—who stands to win a future Leyte? People from the front lines are reluctant to predict it’s America.

At least, it’s no longer self-evident the answer is America. On balance, then, the Battle of Leyte Gulf is a good-news story for the PLA complete with a parable on the perils of carrying even sound strategic concepts to extremes. It will be enlightening to track what PLA thinkers say about the battle as the anniversary looms . . . and ponder what we should learn from what they learn from history.