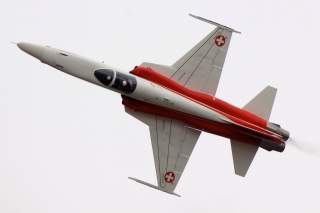 But one seemingly odd budget line in the Navy's portion of the request asks for $40 million to acquire 22 used F-5E/F Tiger fighters from Switzerland. The F-5s are at least 35 years old and unsophisticated. But they would play an important role in U.S. service.

The Navy plans to modify the F-5s with new avionics, data-links and radar-jammers, bringing them up to the latest F-5N standard. The 12-ton, radar-equipped, supersonic fighters then would serve as "adversaries" in the Navy and Marine Corps, playing the role of enemy fighters in war games and other training.

The twin-engine jet boasts flight characteristics that are similar to many Russian-made MiGs. Most famously, F-5s stood in for MiGs in the 1986 movie Top Gun. “The F-5 offers an incredibly economic and proven solution for a range of threat presentations,” Tyler Rogoway explained at The War Zone.

If in coming years the Navy and Marines decide further to expand and extend the adversary force, there are still 26 F-5s in Swiss service. The Swiss air force plans to replace the Tigers with a new type starting in 2025.