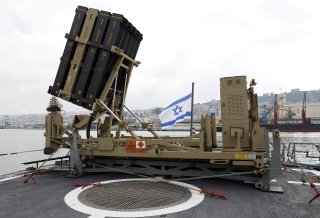 Israel’s Iron Dome air defense system has been instrumental in defending Israel against thousands of Hamas rockets and other threats over the last decade. It has fundamentally changed the way Israel wages war, providing the home front protection and giving the armed forces and political leadership time to consider a response confident that they have an air defense umbrella. Now the U.S. Army is testing the system and a new joint venture between Israeli and U.S. companies to build the system in America will see the missiles take to new heights on the world stage.

Raytheon Missiles and Defense and Rafael Advanced Defense Systems announced their joint Iron Dome venture on August 3. They are finalizing a site location to begin building the missiles completely in the United States rather than transferring parts to Israel. Rafael’s executive vice-president for air and missile defense Pini Yungman says Rafael has a long history of working closely with Raytheon since 2005. Because both companies are experts in missiles in their respective countries, their partnership puts together to key missile industries. Yungman, a Brigadier General in Israel’s reserves with four decades of experience in air defense, says Rafael and Raytheon first began working together in 2006 on the David’s Sling air defense system.

David’s Sling is a medium-range system that compliments the Iron Dome, which is for shorter range threats. It is part of the multi-layered approach Israel uses to confront these kinds of threats. At the top tier is the Arrow missile for confronting ballistic missiles. All these systems have received financial support from Congress and represent varying layers of cooperation between the United States and Israeli defense industries. In July 2019, America and Israel tested the Arrow 3 in Alaska, for instance. The Raytheon partnership on David’s Sling, which has faced challenges, led to the production of the missile system and firing unit in thirty U.S. states and the American development of the SkyCeptor interceptor that can be used with the Patriot battery.

Iron Dome’s long journey to the United States began back in 2012 after Israel developed the system on its own. By 2014, America had provided $929 million in financing for the successful system. In 2019, U.S. Congressional funding reached $70 million annually. Meanwhile, Raytheon became the prime company producing the interceptor under contract with guidelines that call for 50 percent of the components to be manufactured in America. Around thirty U.S. vendors produce seventy percent of the parts today for the Iron Dome missiles interceptor in America, according to the company. In Israel, Iron Dome consists of the Tamir missile and the box-like launcher and the radar system, which is made by a separate company. In the United States, the focus today is primarily on making the interceptor.

According to Yungman, the current joint venture has been in the works for two and a half years. The venture will enable better management of all the vendors and do what the company called “all-up-round” assembly in a facility in America. The company has looked at facilities in Huntsville, Tucson and Camden, Arkansas. Raytheon has a facility in Camden according to reports and Arkansas Senator John Boozman has been supportive of deploying the Iron Dome with the U.S. Army to defend U.S. forces in the Middle East.

The new partnership will mean no longer needing to send parts to Israel for the final integration of the missiles. “In the future we will get the missile and test and then deliver to the [Israeli] air defense units,” says Yungman. The United States currently has two Iron Dome batteries. On August 3, unrelated to the announcement of the joint venture, a giant Antonov cargo plane landed in Israel carrying U.S.-made Oshkosh trucks. Unloaded at Ben-Gurion airport, the trucks will be used for the Iron dome systems the U.S. purchased for the army. All of this was under an August 2019 agreement between the Israeli Ministry of Defense and U.S. Department of Defense. Israel did not elaborate on why the trucks were flown to Israel for testing with the systems that are destined for America, instead of just flying them directly to the United States.

According to Defense News, the trucks in Israel will be mated with the Iron Dome launchers and then sent to the United States after testing later this year or early next year. The shipment of the trucks and the integration of the system for the U.S. army to fill a need for shorter range defense and is part of the context of the joint venture and U.S.-Israel military cooperation. For instance, U.S. forces in Iraq have faced rocket threats that Iron Dome is designed to deal with. It took more than half a year for U.S. authorities to send C-RAM systems to Iraq to deal with the threats and yet rocket fire continues weekly against U.S. forces in Iraq.

The new facility to build the Tamir interceptors in the United States shows the confidence that these missiles have wider uses than just for Israel’s defense needs. “In my understanding and perspective and professional air and missile defense many forces and countries need to have such a system as Iron Dome,” says Rafael’s Yungman. He is optimistic the United States will want more batteries. Iron Dome is successful not only against rockets and missiles but also against drones and other threats. America needs an interim short range air defense (SHORAD) solution, or a vehicle based version called V-SHORAD or IM-SHORAD.

Israel says that the Iron Dome is the best and most experienced system of its kind in the world. Facing off against Hamas and also threats from Syria and Lebanon since 2011, it has proven itself to have a very high rate of interception capabilities, exceeding ninety percent. Using radar to identify launches, trajectories and threats, and operating with a system that enables rockets destined for open areas to be ignored if necessary, it intercepts threats based on plans from the operators.

Rafael emphasizes that the interceptor is low cost and that this is a benefit of the system as well. In Israel, there were previously questions about the cost of the interceptors, estimated at $50,000 for each missile, since they were used against supposedly cheaper Hamas-made missiles. Today that discussion has largely ended in Israel and the efficacy of the system is recognized. In the United States, the Tamir interceptor that is built is called Skyhunter. “We are developing very specific concept,” says Yungman. “We developed Iron dome and David Sling in an open architecture method, we can integrate the interceptor and sensor and command and control; and mainly the interceptor can be integrated into the U.S. or other customer’s systems.” That means using the Skyhunter with U.S. radar or command and control produced in America.

So far, there have been three tests of the missile in the United States. This included using a multi-mission launcher at White Sands and a full Iron Dome battery system and a third test with the U.S. Marines in October 2019. More U.S. Army tests will take place in 2021 at White Sands, according to reports. Yungman says he hopes that there will be more joint programs with Raytheon and U.S. partners. “We owe that to the U.S. government, due to them we are able to develop the David Sling system and thanks to them we are producing Tamir interceptors.” This represents more sharing of defense needs between the two countries and a return on investment for the U.S. taxpayer since Iron Dome received hundreds of millions of dollars in Congressional support.

This kind of joint venture and development is unique to the Israel-U.S. partnership. There are no other examples of America supporting innovative defense approaches abroad and then having foreign defense companies partner with U.S. companies to produce such successful technology in America. This web of relationships not only created Iron Dome and David Sling but is now also linked to U.S. support for Israeli counter-drone technology and other initiatives.

With production at a U.S. facility, Rafael hopes that the costs will be kept down and that the number of interceptors produced will increase, although they don’t specify by how many. After the joint venture on the interceptor, there may be more discussions about the launcher as well. Currently, the U.S. concept for the Iron Dome may be different than how Israel uses it, with more vehicle-based approaches or other concepts on how best to deploy it. This is linked to the nature of U.S. defense needs, which are different than Israel. America may want the system for bases abroad or to be used in the field, whereas Israel is a much smaller country and the system is used primarily to defend civilian areas from rocket fire.