America Will Send Two Carriers to Send Russia a Message 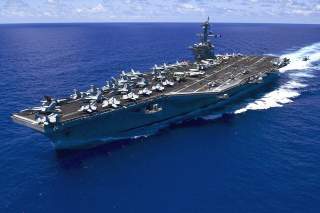 With two U.S. aircraft carriers operating in the Mediterranean Sea for the first time since 2016, it would be hard for Russia to miss the intended message.

But to hammer the point home, U.S. Ambassador to Russia John Huntsman visited the carrier USS Abraham Lincoln on Tuesday, according to a 6th Fleet news release.

"Each of the carriers operating in the Mediterranean at this time represent 100,000 tons of international diplomacy," Huntsman said in the news release. "Diplomatic communication and dialogue coupled with the strong defense these ships provide demonstrate to Russia that if it truly seeks better relations with the United States, it must cease its destabilizing activities around the world."

The Lincoln and carrier USS John C. Stennis began dual operations in the Mediterranean Sea on Tuesday, the news release says. Currently, more than 10 ships, 130 aircraft, and 9,000 Marines and sailors are deployed to the region.

Rhe deployment of two carriers may be meant to reassure NATO allies of the United States' commitment to the alliance, but it also comes a week after the release of the Mueller Report, which detailed Russia's interference in the 2016 presidential elections.

"The Russians present a risk," Acting Defense Secretary Patrick Shanahan told reporters on April 18. "My job is to manage the risk. We have tremendous capability at Cyber Command and the NSA."