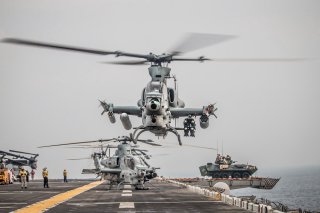 “Alexander the Great was a tremendous success for the Marines of the 22nd Marine Expeditionary Unit,” said Lt. Col. Christopher Myette, executive officer of the 22nd MEU, in a U.S. Navy statement covering the exercise.

“The training we executed with our NATO Allies in Greece reinforced the close relationship between our two militaries and provided an outstanding opportunity to learn from each other and hone our warfighting skills in a first class training venue.”

Though the exercise occurred outside the auspices of NATO, it comes at a precarious time for European security. Russia’s ongoing invasion of Ukraine has injected a fresh concern for European security into European capitals and is the most significant foreign policy event of the last thirty years.

“The culminating amphibious assault was an awesome demonstration of the amount of combat power that can be rapidly projected ashore when combining the capabilities of the Hellenic Armed Forces and the Marines and Sailors of the ARG-MEU team,” said Lt. Col. Christopher Myette, executive officer of the 22nd Marine Expeditionary Unit.

“We thank our hosts from the 32nd Brigade of the Hellenic Marines for their tremendous hospitality, support and professionalism.”

Though the war in Ukraine has been primarily a battle for land and airspace, the Ukrainians have demonstrated a surprisingly potent anti-ship capability for a country without an effective naval fighting force. Moreover, lessons gleaned from Ukraine’s utilization of anti-ship munitions could aid the U.S. military and NATO allies.

With the United States poised to increase its troop presence in Europe to levels not seen since the end of the Cold War, any opportunity for collaboration and cooperation with the United States military, the bedrock of European security, is worthwhile for Greece and other American allies in Europe.